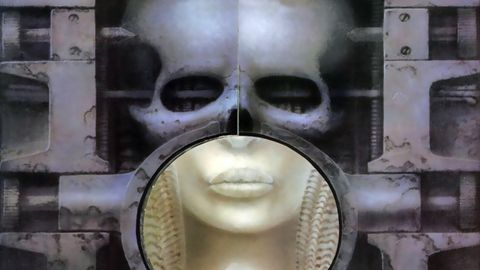 While ELP were commercially enormous, post-punk revisionism has excised from history that they were also cool. At a time when prog was seen as the mature, cerebral flipside to the visceral childishness of (the equally mega-selling) glam, ELP were prog’s ultimate poster boys.

The self-consciously hip New Musical Express’s decision to give away an exclusive flexi-disc of Brain Salad Surgery’s title track in the week of the album’s release was indicative of ELP’s enviable position in November ’73’s rock zeitgeist. At a time before enormity was considered anathema, NME sold ELP’s hugeness as a virtue to their – then – 300,000 readers, and as a prog-curious 13-year old looking for life beyond Slade’s three-minute glitter-bombs, this writer (along with a generation of his music-minded teenaged peers) wanted in.

As 1973 drew to its close Emerson, Lake & Palmer were very probably the coolest band in the world. Glam was on the wane, prog was on the rise and, let’s not be shy, ELP were three good-looking lads. While teenyboppers were swooning over Donny Osmond their elder sisters were writing to the inkie music press offering to be Carl Palmer’s drum stool. I’m not even making this up; that letter got published.

Brain Salad Surgery really shouldn’t work. On paper, it appears as insane as it ever did. It kicks off with a hymn, goes into a section of piano concerto rewritten to feature the first recorded appearance of ‘electronic percussion’, then a pretty acoustic ballad, then a barroom piano knees-up, all topped off with a half-hour science fiction suite. It shouldn’t work, but it does. Brilliantly.

Keith Emerson had been planning an assault on Parry’s setting of William Blake’s Preface To Milton, AKA Jersusalem, since his days in The Nice, but had never successfully nailed it until Carl Palmer supplied a complementary percussion part. “If somebody asked me what piece of music summed [us] up,” Palmer confided to me in 2004, “the Englishness of it, the progressiveness of it, the sheer originality of it – I would say Jerusalem.” And he’s not wrong. This Super Deluxe Edition presents four remastered mixes of Jerusalem – first, original album, new stereo and 5.1 – and Jakko Jakszyck’s new mix is a revelation, improving on the original in crispness, clarity, dynamism and sheer emotional impact.

Alberto Ginastera’s Toccata has never been the easiest of listens. Possibly the most challenging of BSS’s tracks, it’s hectic, jarring stuff and – being cutting edge – very much of its time. Technically though, it’s faultless, Carl Palmer’s utilisation of drum-triggered electronics dazzling, if the impression that you’re hearing extracts from the soundtrack to an unseen 1970s sci-fi TV series is occasionally overwhelming. Greg Lake’s Still… You Turn Me On remains an unequivocally gorgeous slice of quintessential Englishness. Utilising a similar rising cadence to Nilsson’s Without You it might have been an enormous hit single had ELP not chosen to go with the non-charting Jerusalem instead.

While newcomers should seek this out, upgraders (the more likely market for such a lavish box) will also find that it’s never sounded better. Jakko Jakszyck’s remixes are staggeringly good, and need to be heard. There’s a 5.1 mix for those with widescreen ears, extensive sleeve-notes, limited extras (that NME flexi-disc, Jerusalem’s B-side, a discful of early mixes/alternative versions) and an illuminating period documentary DVD featuring live performances and those all-important signature juggernauts.

Brain Salad Surgery’s core material has finally been accorded the remix, remaster and 5.1 expansion that it’s always deserved. A six-disc job might seem a little excessive, but then, prog’s erstwhile poster boys didn’t get where they are today by eschewing excess.