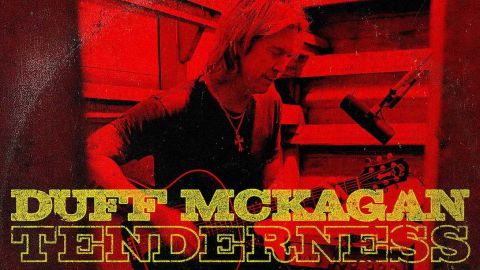 Duff McKagan was the punk rock kid who ended up in the world’s biggest hair-metal band, but it turns out he had an outlaw heart all along. Tenderness, his first solo album since Guns N’ Roses reunited, and his second after 1993’s Believe In Me, forsakes the glitz and glamour of Hollywood and rock’n’roll in favour of Nashville and rootsy Americana.

Okay it isn’t quite a cryin’-at-the-sports-bar country and western album, but its dialled-back ambience, strategically deployed pedal steel guitars and gospel-tinged backing vocals put it in the ballpark. There was always more to the bassist than the Sunset Strip bozo caricature (it’s difficult to imagine Slash launching a wealth-management company, as Duff did when he kicked the hard stuff), so maybe this kind of departure shouldn’t be surprising.

What is surprising is just how good it is. Duff has been talking up Mark Lanegan and the Afghan Whigs’ Greg Dulli as touchstones, and the nocturnal ambience the so-called Gutter Twins conjure on their own work bleeds out across Tenderness. But the biggest factor here is McKagan’s chief collaborator Shooter Jennings, son of outlaw country frontiersman Waylon Jennings. Shooter and his regular backing band sprinkle some authentic Nashville stardust across the album. You want haunting lap steel guitar and a phalanx of fiddles? Shooter’s got ’em.

Any worries about cultural tourism are dissipated in a few seconds of the opening title track. A slow-burning semi-ballad that makes a heartfelt plea for a little bit of humanity in an inhuman world, it’s got a reserved stateliness you’d never expect from a man who shares a stage with Axl Rose.

Similarly, the gospel-infused Feel – written in honour of Chris Cornell, an old friend of McKagan’s from Seattle – snaps with the kind of honest-to-God emotion his regular band would struggle to match. It helps that McKagan isn’t the greatest singer in the world; there’s no artifice here. You can take the kid out of punk rock…

If there is a problem here, it’s a surfeit of conscience. McKagan has called this a socio-political album, and by God he’s determined to mourn the world’s ills, from the opioid crisis to the unending wave of police brutality. Noble sentiments, for sure, but undercut by occasionally ham-fisted lyrics.

The worst offender is Parkland, which is simply a litany of school shootings that draws the conclusion: ‘Oh shit, this is really bad.’ That’s paraphrasing, naturally. But not by much. Yet the album transcends all that, partly because it wears its heart so openly on its sleeve, partly because these songs gleam like jewels in the desert sun.