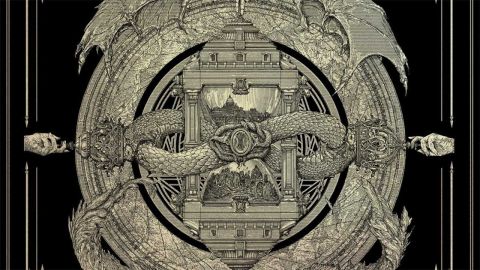 As the band that first made Norwegian black metal a truly commercial proposition, a certain burden of expectation hangs over everything Dimmu Borgir do. It certainly doesn’t help that the band’s 21st-century work has been uniformly bombastic and grandiose in a way that few of their peers, Norwegian or otherwise, can match. After a somewhat mixed reaction to 2010’s Abrahadabra and an unexpectedly lengthy hiatus, Shagrath, Silenoz and their ghoulish brethren have a point to prove on their 10th studio album. Happily, Eonian unequivocally delivers.

There are choirs, there are orchestras, there are bursts of industrial noise and, we can only assume, there are several skull-encrusted kitchen sinks knocking around in here, too. Most of all, there are some wickedly complex and yet hugely memorable songs, starting with grand opener The Unveiling, which crams an insane number of ideas into its six imperious minutes, and continuing with irresistible first single, Interdimensional Summit. It’s a succinct synopsis of Dimmu’s trademark sound, but souped-up and blessed with some of the band’s sharpest hooks to date. Aetheric is a more challenging beast, full of warped tempo shifts and sudden moodswings, while Council Of Wolves And Snakes begins like Slayer-gone-cosmic, morphs into a blitzkrieg of muscular mid-paced riffs and then side-steps neatly into a serene choral midsection. It’s all meticulously crafted and beautifully realised, Dimmu Borgir’s dedication to making everything sound absolutely huge serving such extravagant material well. Where Abrahadabra occasionally felt over-egged, Eonian is a masterclass in fine details and finesse. The Empyrean Phoenix is symphonic metal given a hellish, fearless makeover, I Am Sovereign offers a maze of brutal and refined ideas that blossoms into a thrilling melodic crescendo and, best of the lot, Alpha Aeon Omega conjures the spirit of early 90s blackness, insane 130bpm blastbeats included, while still sounding fully in sync with extreme metal’s cutting edge. Yup, they’re back and still thinking big.