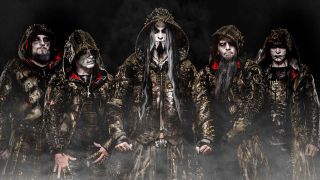 After eight long years, the symphonic black metal powerhouse Dimmu Borgir are releasing their new album Eonian. In the new issue of Metal Hammer, we sit down with Shagrath and Silenoz to discuss the new record and its Godzilla-sized choral vocals (seriously, Eonian sounds huge).

But how did each song come into existence? The two remaining Dimmu founders reveal all.

Shagrath: “This song is very much about mixing oil and water, major and minor. It was a difficult song to put together because it’s very melodic but also very heavy. But it has these different kinds of atmosphere, these ups and downs, and that’s what we wanted. Different things go through your mind when you hear it.”

Shagrath: “This one was written back in 2012, so it’s linked closely to the Abrahadabra album musically. It’s a song that shows we’re not afraid of trying new, different elements. It’s quite melodic but also very majestic, so to speak. It’s a bombastic, headbanger kinda song. It represents Dimmu in a good way, but it’s more melodic too. It’s just one part of the puzzle. As a single, it doesn’t represent the whole album.”

Shagrath: “This is one of the more challenging songs that we had to put together. It had some old ideas from earlier on. There are a lot of tempo changes in the song. We had some arguments about this one, to be honest ha ha! It was a hard song to write but it has some high quality riffs in it. It has that old school feeling but camouflaged in our expression.”

Silenoz: “Nothing that’s worth doing is ever easy to put together and I think this proves that.”

Shagrath: “This one started out as a little seed, so to speak. It started with a single guitar idea and the first impression I got was that it was a bit like Megadeth or something. I was a bit sceptical at the beginning ha ha! Later on, we played around with programming some drum beats, turning the song to a more rhythmic, shamanic vibe…”

Silenoz: “It’s very percussion-led. That’s why we ended up adding some more tribal drums, together with the real drums, to enhance that feeling. It wrote itself, to be honest. We like to surprise the listener a little bit, at least. That song, specifically, sticks out a little bit. You can hear certain elements that are influenced by early 90s black metal albums…

Shagrath: “Especially the way we do the chords, some of the chord progressions. We use older strings and that’s typical for older Norwegian black metal.”

Silenoz: “It also has what I would consider, for want of a better term, a romantic lead part in there. It’s almost folky, but I don’t want to use those kinds of labels on our music. But it gives you the feeling of mountains and forests and moors and… I don’t know, whatever else there is in nature ha ha!”

Shagrath: “This song bloomed from the simple idea of meeting up at the rehearsal room and pressing record on the tape recorder…”

Silenoz: “You were playing drums and me and (guitarist) Galder were playing guitar, obviously, and we just jammed certain riffs. We thought ‘Okay, this might fit together’. So we had the bones of a structure, a song idea, which we took back to our pre-production studio and finalised there. Sometimes songs come at the warehouse, our headquarters, playing stuff live or we just use computers like every other band does.”

Shagrath: “This one started out from an orchestral part, which was technical and difficult to put down on tape.”

Silenoz: “I remember when we had the first section of the song, I had this idea of a slower, more rhythmic, tremolo type riff and it had an overlaid lead part on it, which I showed to Galder. We took a break for an hour or so, and when Galder picked up the guitar, he played the lead part a little differently, and from that came another part. So it’s kind of art by accident, that middle section. Sometimes spontaneous stuff turns out to be really cool.”

Shagrath: “This was one of the first songs we completed. When you start out with a blank page, it’s nerve-wracking in a way. We did feel some pressure in the beginning, but the first song went a lot more smoothly than I was expecting. I guess it’s built on an atypical drum pattern, it’s a little different. It was Galder’s idea – he came up with a riff…”

Silenoz: “…or maybe the drum pattern came first? I can’t remember. Either way, it brought this really primal approach to the song.”

Shagrath: “It was a really interesting idea, so we built on it from there. Again, it’s a song that has different elements and that’s how we put songs together these days. It’s about the unexpected. So you get a Dimmu Borgir riff with orchestration and industrial elements… and there are keyboard sounds that play an important role, too.”

Silenoz: “It’s one-finger keyboard but it’s so effective! It fits the atmosphere and the melody perfectly.”

Silenoz: “I guess you could say it’s a kind of title track, but it wasn’t intended as the main song or anything like that. This song shows that we can still have those blast-beats that people crave. We do it in a very primitive way, maybe not musically speaking, but this song is put together with really primitive stuff. There are long sections of blast-beats and straight into a very primitive Burzum-esque drum beat. Then you have the huge choirs… it’s one of my favourite choral parts, at the end of this song. It sounds like this Kursk Russian submarine male choir… it’s a really cool feeling.”

Shag: “It’s a really epic and intense song. It gives me the feeling of the early ‘90s, if you dig into the riffs and the melodies. The verse riffs are very much inspired by early ‘90s black metal guitar riffing. We had a few challenges because the tempo is 130bpm, which is quite fast!”

Silenoz: “We wanted the drums to sound like they were played by a real drummer. There were very challenging parts for our drummer to play but it’s a challenging album. We all pushed ourselves to the max.”

Shagrath: “We wanted to have that traditional outro, like we did on Puritanical (Misanthropic Euphoria, Dimmu Borgir’s fifth album, released in 2001). The riff idea came from a mellotron sound on the keyboard, an idea that’s been flying around. We wanted it to have a build up in the mid-section, to hold back at the beginning to create more space and to let it breathe and tell its own story. It didn’t need any lyrics because it gives you pictures of this journey…”

Silenoz: “Rite Of Passage is about moving onto whatever comes next. By this point on the album, you’ve been overloaded with a lot of sonic information, so this song gives you a chance to reflect a little on what you’ve been listening to.”

Dimmu Borgir's new album Eonian is released May 4, and available to pre-order now from Amazon.