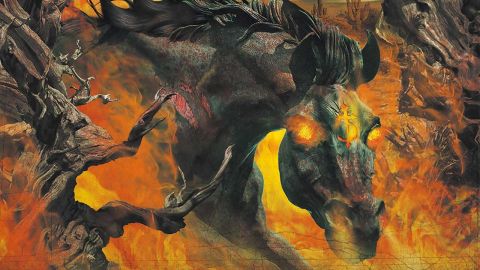 Dez Fafara is an unapologetic heavy metal chameleon. When he formed Devildriver 15 years ago after the demise of Coal Chamber, he traded gothic-tinged nu metal for a more aggressive brand of groove metal, and thankfully it’s aged considerably better than the catalogue of his former band. Better yet, Devildriver have proven to be a rare act that’s steadily gotten heavier over time – and their new album, Outlaws ’Til The End, is arguably their darkest yet.

There’s just one catch: it’s a covers album. Actually, make that two catches: it’s a country covers album. But while Outlaws…’ flask overflows with lyrics about heartbreaks and hangovers, it also contains undeniably scorching musicianship topped off by venom-tinged vocals by Dez and a number of notable guests, including Randy Blythe, Wednesday 13 and Hank 3.

Hank’s Country Heroes begins the festivities, with the former Superjoint Ritual bassist delivering his best Ozzy impression as Dez growls about getting wasted over blistering double-bass rhythms and chugging guitars. It might be a country song on paper, but your neck muscles will claim otherwise.

From there, Randy and his Lamb Of God bandmate Mark Morton help to metallicise Willie Nelson’s Whiskey River, the staccato black metal riffing of which might give poor Willie a heart attack. Other memorable moments include an amped-up rendition of The Eagles’ Outlaw Man, which finally answers the question of what a pedal steel would sound like atop a backdrop of distorted guitars; a brutally heavy rendition of George Jones’s liver-threatening If Drinking Don’t Kill Me; and a d-beat-infused interpretation of Johnny Cash’s The Man Comes Around that has just the right amount of blackened atmosphere for a song by the original Man In Black. Not everything works – Hank Williams Jr.’s A Country Boy Can Survive will lower your IQ no matter how loudly it’s played – but overall, Outlaws… is a bizarre idea that’s executed surprisingly well.