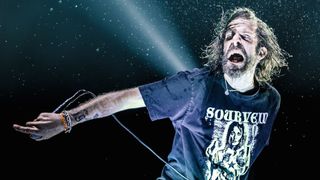 David Randall Blythe, better known to us all as Randy, has been pushing the boundaries of heavy metal since he joined the band that would become Lamb Of God in 1995. Here he reveals all about finding his path in life through punk rock, the injustices in the world that send him into a rage, and why, at heart he’s still a massive nerd…

“February 21,1971 at Fort Meade, Maryland. We were on an army base as my father was in the Air Force. We weren’t there very long.”

What kind of family do you come from?

“My parents split when I was young but it was a good thing – there weren’t any arguments over custody or anything; they were both great parents, it just wasn’t working out. When I was in the fourth grade I moved to Virginia with my dad and brothers and we lived for a few years on a farm with my grandma. That was really cool. My dad worked a lot though, so along with my grandma I kinda had to raise my kid brothers.”

Were you a good big brother?

“I was very protective, I made sure they did their homework and stayed out of trouble. I wasn’t always the best role model but my intentions were good.”

What were you like when you were growing up?

“I got into punk rock around sixth grade, and before that I tried to get on with everyone, I tried to fit in. But I was kind of a nerd and we didn’t have a lot of money. I mean, we weren’t living in a shack or anything, but we certainly weren’t rich. Kids can be kinda cruel if you don’t have the latest clothes or whatever, ’cos they’re raised by small-minded petty idiots, who teach them to be small-minded petty idiots. So I tried to get along with everyone but people weren’t that friendly to me. I was never popular or anything, so when I got into punk it was like ‘fuck everybody’ and it kind of stayed that way.”

In what way were you a nerd?

“Man, I’m still a nerd. I still play Dungeons & Dragons – that’s how deep it goes. I wasn’t that into sports. I did wrestle; I was into that for a while, but I wasn’t the dude playing football, I was the dude reading books. I used to work in a bar and I remember the bartender told me one time, ‘Randy, if the library sold beer we’d never ever see you’. I always had my nose in a book and I still do. I wouldn’t understand life without books, it’d bum me out. Yeah, Dungeons & Dragons, books, comics, thick glasses… nothing’s changed.”

How did you get into punk?

“I was in the sixth grade and that summer I went to nerd camp, which was for ‘gifted and talented’ students and at that point I liked music but I only really had access to what was on radio. This kid named Jason handed me a tape with Never Mind The Bollocks… on one side and Bob Marley on the other. I liked the Bob Marley, I’m still a huge reggae fan, but with Never Mind… I was like, ‘Wow, this is real, these people are pissed off.’”

Being a punk couldn’t have made it any easier to fit in?

“Before you could buy your prefab goth or punk rock uniform at the mall, you had to work pretty hard to find alternative music. There was no internet, no Amazon – it took some doing and it was pretty much a commitment. I sound like a bitter old man, but I kinda miss those days. Nirvana came along and Green Day and suddenly every frat boy in the world dyed his hair green. It kinda commodified the underground as it were. Back then if you were gonna be a freak and dress like a freak, you were gonna get treated like a freak.”

Were there a lot of confrontations?

“Yeah, there were lot of conflicts and fights. Verbal conflicts all the fucking time; someone was always talking shit. People fear what they don’t understand… Sadly most human beings have that ignorant mindset, I believe. But I started going to shows at 14 or 15 and meeting other people who were like me. The main reason I came to school in Richmond was that it had a big music community. I’d been going up there for shows for a long time and I moved there under the pretence of going to college, but I really wanted to hang out and go see shows.”

Did you enjoy college?

“It was fucking wonderful. I lived in the dorms for the first year and somehow didn’t get thrown out of school. I never finished college – I think I’m still at college, I probably have one class left to take or something – but it was great, there were shows every night of the week, if not at a club then at a house party.”

Did living in Richmond have a big influence on you as a person?

“Everyone was doing music. There were great record stores, great book stores, and everyone was doing something – art, writing, painting, sculpture, zines. And everyone was pretty serious about what they did. They weren’t trying to get rich or famous, just make the best art that they could. It was very inspiring, seeing people doing their own thing, thinking for themselves, not living extravagantly and being perfectly okay with that, being happy.”

The city is home to a lot of respected bands. Were you in contact with many of them?

“I saw GWAR when I was a teenager and they’re good friends of mine to this day. When I first saw them I didn’t know them and I was like, ‘Oh my God, what is this?!’ They were kind of a mystery to me with their masks and all, but as time went on you realised they were just the guys you saw at the bar or working jobs or whatever. I used to live near the old Avail house – they moved down from Northern Virginia and they kind of built their own scene around them. It got to the point where you couldn’t even see them in Richmond ’cos it’d sell out, so they’d have private parties at their house.”

How did you first get into singing for bands?

“I was friends with everybody in bands, and there was this band, hose.got.cable, who would play and I’d occasionally sing for them ’cos I could do the metal voice. Eventually my buddy from Burn The Priest, which became Lamb Of God, said, ‘You gotta try out for my band’, but at that time I was hopping freight trains across country, squatting and stuff, so I told him, ‘Oh I’m about to go travelling for the summer, I’ll speak to you when I get back’. I got back two months later and that night I went to see them play and I said to my then-girlfriend, ‘That band’s amazing, that’s the band I’m going to sing for.’ So I made a decision to be in the band – they didn’t really have a choice! But of course I had no idea it would become my life, it was just a thing to do.”

Did you ever imagine the band would become such a big thing?

“Fuck no, dude! When we formed this band it was just about getting together and drinking beer. Maybe play a bar or go out of town occasionally. Everything has happened very slowly and organically for us – it’s been 15 years and we’ve worked every inch of the way.”

Was it hard making ends meet in the early days?

“I’d come off a six-week tour, not having made any money, and got out of the bus and walked straight into my restaurant day job ’cos I had bills to pay. But it was normal, everyone in Richmond did that so it was never like, ‘Oh, I’m making a big sacrifice.’”

Has it been difficult balancing family life and a successful band?

“Yes it is difficult. It’s quite a learning curve, I’m learning as I go along and so is my wife I believe. We’ve just done a world tour and I’m only home for three weeks before I go out again on tour and it took me a week to get over the jet lag. My wife is very, very patient with me, she knows I’m tired, but at the same time as soon as I’m back my friends want to hang out, my family wants to hang out, I’m trying to make time for my wife, I still do interviews and stuff and I’m trying to find time for myself. So it is hard. Luckily all the women we married are extremely exceptional women and they were with us before we were famous or whatever.”

Despite all the success you’ve remained pretty outspoken. Do you feel that angry punk rock kid is still inside you?

“Absolutely man, abso-fucking-lutely. I kept that attitude – there’s nothing wrong with that. When you’re 16 everybody ’s mad, I just happened to be madder than most. But I was mad at everything in a kind of stupid way. As I’ve grown older you realise what is worth being mad at. There’s a lot of injustice and fucked-up things going on and people should be mad. There’s such a thing as justified anger, you just can’t let it run rife. That’s one of the problems I think in the world: people aren’t mad, they wear blinkers and as long as they have the things they need to keep them in their comfort zone, fuck everyone else.”

“I just came back from Indonesia and saw the most mindblowing poverty I’ve ever seen in my life. You can rent a baby for two dollars, to go begging with. That says something about poverty and the value of human life. And that’s a large part of the world. A lot of places don’t have running water or electricity. I think people need to realise that’s reality and that there’s a lot of things in the world we need to fix. I’m pretty disgusted with a lot of people who just think about themselves.”