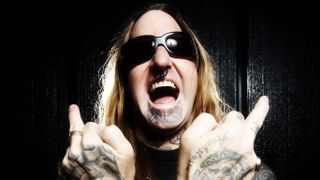 Dez Fafara, 50, is the frontman for Santa Barbara metallers DevilDriver. His band released their seventh studio Trust No One in May. You don’t make music for over two decades and travel the world many times over without learning a thing or two along the way. Here’s what’s on his mind…

“I smoke a lot of marijuana and I have since I was a kid. I believe in the health benefits of it all around. But I don’t do drugs. I would advise people to stay away from pills, cocaine and methamphetamine – obviously. I’ve seen that drug tear people apart and they rarely come back. I’ve had a lot of friends die from overdoses with pills and alcohol on tour buses too, and I watched the heroin epidemic kill at least three of my friends. There was far too much of that going around whilst I was growing up. So I would say stay away from drugs because they’re going to fuck you up. But I really do think that marijuana should be legal everywhere. It’s ridiculous that it’s not; alcohol and cigarettes kill way more people.”

“I 100% believe that there are positive qualities to tripping. I’ve tripped on acid maybe 50 times and I’ve taken mushrooms hundreds of times in my life. The benefit of tripping is I think it awakens something different within you. I’m not telling people to go out and take acid. But the molecules of DNA were discovered because men were on acid, so there you go. I believe that mushrooms can have a very powerful place in your life too, if you’re in the right atmosphere. I’m not saying take mushrooms then go run around the streets though. I like to be in nature; the mountains or the desert is the perfect place to trip. You can sit and have conversations with friends that you’ve known for ten years and all of a sudden you’re like, ‘Wow! I know you now. I see you different and you see me different.’ And you are different – your mind is expanded and there are neurons that are firing that are completely different. There are also bad trips though, so you do have to be careful. But I would say everybody should take mushrooms once in a lifetime.”

“Nu metal spawned a lot of killer bands with a lot of diverse music. The cool thing about that scene is everybody did something different. Every scene dies, and when scenes die people talk ill about it until it comes back around. But I think it had a lot to offer and right now some of the biggest bands on the planet came out of that scene: Korn, Disturbed, Slipknot, Deftones and System Of A Down. And the scene itself was so diverse. Everybody did something different because we all wanted to get the fuck out of LA, since the hair metal scene had killed it. Coal Chamber were on tour in a van when we got a phone call to say that System got signed. We were stoked for them. And I found Static-X playing in a place called the Coconut Teaszer in front of fucking 30 people. In fact, my tour manager right now, Eddie, used to run The Roxy and I called him to let him know that he should check them out. Then when they got signed we applauded them. So we all came up together, man. And Coal Chamber made me who I am today. DevilDriver is who I am now, but obviously I just did a Coal Chamber record and had a great tour, so it is what it is. I wouldn’t change a fucking thing. I’m proud of everything I’ve done.”

“I’m 100% anti man-made religion. I think it’s brought nothing but war and slavery and it’s wiped out generations of people. Think about it. Buddhism is a beautiful thing, and I think that there’s a spirit and a higher power within all of us, but it’s not a man-made religion. Sadly, the need to enslave other humans has always been there. We’re the only odd thing out. If you took humans off the planet then all of a sudden it would all work. It would be beautiful and the biosphere would be perfect. But we come and we put concrete on everything, and we destroy our oceans and our air, and we encage and enslave and murder each other. I always say that when the deluge comes I’ll stand up and I’ll be ready for it. It’s fine. We deserve what’s coming.”

“I’ve never had the desire to be famous. I’ve only ever wanted to do music and travel the world and play on stage. Other than that, I’m extremely anti-social and very private. So fame has no place in my life. I’ve seen it create ego, and when you’re famous and you have ego you can perceive yourself to be above others. I’ve seen that in a ton of fucking bands over the years; one day they’re cool and the next they’re not. It always makes me think, ‘What the fuck happened to you, man? Now you’ve sold a million records you can’t say hi? You used to come up on my bus to get my weed!’ The whole fame thing is the part that I can’t stand. But if anyone ever wants their photo with me, or they want me to sign something for them, then I’m always happy to stop and chat to them because my heroes always did that for me. My heroes took me out on tour and I never saw ego from those cats. Those are the people that you aspire to be like.”

“Money can cause incredible greed and that causes war and death. But then again we all need to make money to survive. If you just purely seek money in your life then you’re missing the whole point though. It’s like when people say, ‘If you enjoy your job then it’s not work.’ That’s what it’s like for me. When you’re out on the road for a couple of months at a time it can be a grind, but there’s nothing else I’d rather be doing. I come from a construction background and I was always on site early as a kid, so I know what it’s like to work. I come from a blue-collar working-class family and that work ethic inspires me to go out and make money for my own family. But I also just had six or seven months off work because I found myself chasing money in order to keep my family at a certain level. Finally, I said to my wife ‘That’s it. I’m done for a minute. Let’s fucking put our feet up.’ My best friend had just passed away and he affected my life greatly. He always used to tell me that I needed to put my toes in the sand more, and when he passed it hit me really hard. So I changed my ways and took some time off and that allowed me to do the Coal Chamber record. Then other opportunities started presenting themselves because I decided to follow my friend Jason’s advice, and it’s made me look at everything completely differently.”

“My wife and kids are the most important thing in my life. They’re the most important thing to me, ever. Everything I do is for them. The first person I talk to when I wake up is my wife and the last person I talk to before I go to bed is my wife. I surrendered myself to her when we first met. She changed me 100%. I was insane before I met her. I was the guy that was drinking a bottle of whiskey a night and riding on top of the bus at 65mph on the freeway. I was literally that guy. But there was a point in time when we were together during our early days when she said to me, ‘This isn’t going to last if you keep going the way you are. So what are we going to do?’ I wanted a family and home of my own, so I got myself straight. She’s brought a lot of beauty into my life, too. She’s an avid reader, so we read together at night, and she’s brought yoga and vegetarianism into my life. She keeps me in check, man. I believe every good woman should keep her man in check, and every man should listen to his woman – provided she’s grounded, because a bad woman can ruin your fucking world. I got so lucky with Anahstasia. And I adore my sons. I have three amazing sons and they’re very talented cats: they’re 18, 21 and 23 and I’m really interested to see what they’re going to do. I’d never want to be that young again, but I love living vicariously through them and going skateboarding through the neighbourhood with them at night. To be young enough to still do that with them is everything to me. Family is everything to me.”

DevilDriver’s album Trust No One is out now through Napalm. The band tour the US with Hatebreed from September.