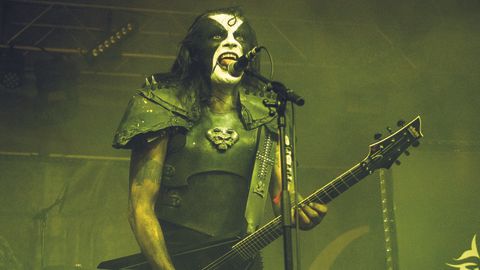 A cold wind is blowing; Damnation is upon us as expectant metal hordes are herded through construction-narrowed hallways, an exploratory spirit the order of the day. Glaswegian four-piece DIALECTS [6] kick off the festival’s third stage, complementing cascading strobes with ethereal instrumental squall.

These are airy breaks before asphyxiating with riffing heft, their majesty occasionally lacking focus. CONJURER [7], er, conjure an early, frostbitten Mastodon; Dan Nightingale and Brady Deeprose spit bile atop hulking grooves and superb pace changes, climaxing in cacophonous screams. On the second stage, ATTAN [8] blast out blackened, sludgy post-hardcore as frontman Remi Semshaug Langseth goes walkabout, shrieking the cathartic Edward in our faces. SVALBARD [7] reveal depth beyond ferocity, slowing their hurtling pace to add strength and emotive texture to their crust, the call-and-response between their male/female, guitarist/vocal duo upping the ante. KROH [7] warm into their first-ever Damnation set, packing out a refurbed fourth stage with their powerful, groovy doom, perfectly tuned to the haunting vocals of Oliwia Sobieszek. Stalwarts of Leeds’ fertile grind scene, GETS WORSE [7] draw a big crowd. The songs are short and the blasts unrelenting, with animosity in spades.

HARK [7] get the main stage off to a furious start. Riffs tumble, grooves pummel and songs stretch to their limits. After a decade of riffs thicker than McDonald’s milkshake, HANG THE BASTARD [8] call it a day. The bastards. During their final show, heads bang and Keeping Vigil is beautifully Southern-fried. MITHRAS [5] fail to hit the stellar heights of recent release On Strange Loops. An awkward start to the second-stage set is compounded by tech woes, their finer elements lost in nebulous sonic fug. ‘Brutal’ is a overused word in death metal but VENOM PRISON [8] qualify lyrically, musically and physically. The quintet force-feed taut, pissed-off cuts from debut Animus, seldom stopping for breath. The mystique of your average ERLEN MEYER [6] show is ballsed-up by the third stage’s PA system playing death metal for five minutes, and the band’s drawn-out, dirty post-rock unfortunately never recovers. SINISTRO [8] have better luck. Their striking vocalist Patricia Andrade is isolated and transfixed by the Portuguese quintet’s granite-hard doom, striking tortured poses, a marionette with strings wrenched by the muscular ebb and flow. DARKHER’s [8] folk-doom melancholy stands out from today’s roster, drawing a huge crowd soon captivated by the band’s presence.

MOSH! HEADBANG! CROWDSURF! ARGH! This is the mindset of EMPLOYED TO SERVE’s [8] crowd. Blips of bestial, blink-and-you’ll-fucking-DIE post-hardcore culminate with a guitar being smashed like a piggy bank. It’s a very different, if no less committed, vibe on the main stage as OCEANS OF SLUMBER’s [8] songs unfurl to to a rapturous crowd. Progressive and doom-laden but still a conductor for fierce, deathly deliverance, they’re driven direct into the heart by Cammie Gilbert’s supremely controlled vocals, …This Road introduced with touching honesty. Like OOS, NE OBLIVISCARIS [5] mix progressive elements with clean and growled vocals, the latter courtesy of Xen who looks like a young Nathan Explosion. Less than fully fledged, the Aussies sound more musical hedging-of-bets than an immersive encounter.

The third stage crowd crush for BOSSK [8] makes for a worthwhile fight. They’ve gone from strength to strength, the emotive heft of their instrumentals speared by bellowing vocalist Sam Marsh. They play savagely and receive a rapturous response. Dry ice chokes the Mine as THE INFERNAL SEA [7] arrive, dolled-up as plague doctors save for vocalist Dean Lettice who’s just, well, a bloke. Their Dissection-heavy racket’s filthy and, with a bit more stagecraft, they’ll be incredible.

Prepare for lift-off. Playing their space-themed Mariner album in full, CULT OF LUNA & JULIE CHRISTMAS [9] prove a transformative and transfixing experience. Backlit and resplendent in a Barbarella dress, Christmas commands the stage as if she’s stumbled into a strange new, gravity-fluctuating world, her lazer-guided voice pulling the heft of the Swedes’ riffs into new dimensions as a closing Cygnus leaves everyone feeling like they’ve been witness to something a celestial miracle. On the third stage, BLACK TUSK’s [7] relentless rawness might be too much to take were it not for a shot of Southern groove that becomes an impassioned catharsis. UFOMAMMUT [8] are something of a comedown, albeit most majestically. The droning doom trio release riffs reminiscent of Sabbath doing cross-country, flanked by screens crammed with psychedelic visuals. They stay to shake hands, too. Gents.

AKERCOCKE [9] are near-perfection. Despite Jason Mendonça’s guitar solos swooping in with excruciating volume, he can’t wipe that grin as he bellows through Leviathan’s blackened death mastery and the rarely aired The Dark Inside. To be all things to all men is a tall order, but ENSLAVED [9] always pull it off. Equal parts progressive, engaging, iconic and extreme, they celebrate their 25th year having aged like a fine mead as the likes of Ruun and Ground expand across the second stage with a glorious romantic sweep.

With January’s shambolic London show behind them, ABBATH [7] exhume Immortal classics alongside solo work from Bergen’s black metal badger on the main stage. The band’s tight, One By One remains colder-than-all and Abbath himself is hilarious, but frustratingly, technical whoopsies hinder the gig. Against Abbath on the smallest stage, DREAD SOVEREIGN [8] don’t get the crowd they deserve, but Alan Averill is in typically forthright mood, swapping his Primordial rags for Vietnam vet get-up as he turns doom metal into a martyr’s cry, immolated in more wildfire guitar glory from axeman Bones. “Get involved or do one!” demands INGESTED’s [7] Jay Evans, closing the stage with a nightcap of bloodthirsty death metal. Anal Evisceration rumbles like a pneumatic drill to the sphincter and while the band aren’t breaking boundaries, it is fun. A sterile student union main hall doesn’t suit ELECTRIC WIZARD’s [8] hedonistic summoning, but they do their utmost to bring the psychedelic party with them, the slick, lysergic doom swagger of Satanic Rites Of Drugula and Funeralopolis, lava lamp light show and all manner of occult exploitation imagery combining for the perfect, intoxicated end to a triumphant day.