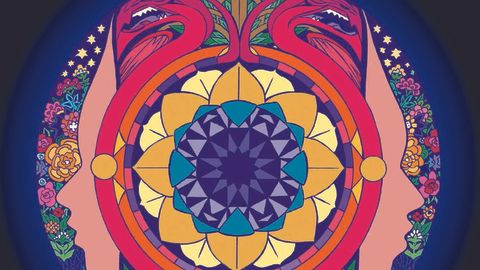 As the bassist of renowned psychedelic weirdos Knifeworld it’ll come as no surprise that Charlie Cawood’s solo album is pretty out-there. The culmination of seven years’ work in collaboration with members of Chrome Hoof, Haken, North Sea Radio Orchestra, Stars In Battledress and Mediaeval Baebes, this record sees the composer tackle a transformation across two named suites of songs, The Divine Abstract and Earth Dragon, as well as a handful of standalone tracks that still fit into the overall narrative. From a compositional viewpoint, it’s expertly realised and orchestrated. At its best, the tracks bristle with life, for example on The 32nd Path, Earth Dragon: The Golden Flower and opener Shringara which features layer upon layer of meticulously arranged instruments from all over the globe in dense, polyphonic harmony.

Some songs use the trick of toying with the motifs of Eastern folk music (In A Floating World, Garden Of The Mind), but other tracks such as Fearful Symmetry and The Western Lands are more rooted in a Western tradition. In any case, fans of the genre or those patient enough to dig into this record will find their explorations rewarded.