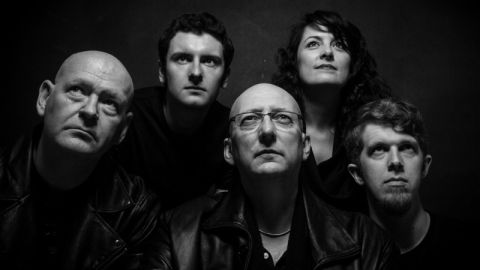 Tonight sees the first international cap for Touchstone founder Rob Cottingham’s new team Cairo, but prior to kick-off he informs us of a substitution. Vocalist Rachel Hill has had to pull out of the mini-tour for health reasons to be replaced by Lisa Driscoll. First out of the tunnel, though, are Luna Rossa, who are missing some key players of their own.

Anne-Marie Helder and Jonathan Edwards present a bare bones version of their acoustic band minus harp and double bass. The sound is immediately full and captivating with an introductory twofer of The Dark Room and Fight Or Flight from their 2013 debut.

The Book Of Love (by The Magnetic Fields, famously covered by Peter Gabriel) is a lullaby for adults given a dreamlike sheen by Edwards’ shimmering right-hand chords. As he switches to an electric piano patch, he teases the intro to Zeppelin’s No Quarter, before the duo exorcise Tiny Demons by Todd Rundgren complete with a playful Helder flute solo.

Secrets And Lies’ tale of marital bliss gone awry smoulders with regret and the set is rounded off with a bittersweet tribute to Leonard Cohen with his classic Anthem – ‘There is a crack in everything/ That’s how the light gets in.’ A magical moment to end a poignant, down-tempo yet uplifting performance.

Lisa Driscoll proves herself to be a fine choice, fronting the band in commanding style for Wiped Out, while adding a touch of theatricality thanks to her masquerade mask and cape.

The initial energy takes a dip, though, for Back From The Wilderness and Katrina whose resolving major key chords, presumably intended as hopeful, sound anachronistic given the subject matter of one of the worst natural disasters in American history.

The oscillation between progressive metal and low-key pop shows Cairo to be a 21st-century schizoid band, neither side mingling seamlessly with its counterpart which is a shame as the heavier, more brooding material is sounding genuinely fresh.

Nothing To Prove gets back on track, hinting at the dance-influenced metal of recent Anathema, while Say and Chasing Storms (from Cottingham’s solo album Captain Blue) provide a more convincing symbiosis of rock and synth pop.

For a world premiere under difficult circumstances Cairo acquit themselves well, but more polish and flow would have improved their live launch.