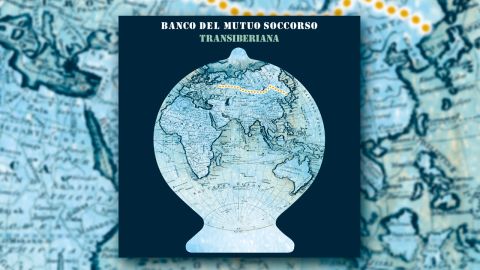 Everything sounds better in Italian. Even an attractive English phrase like ‘beautiful daughter of love’ goes up a notch when presented as ‘bella figlia dell’amore’. How much more so, Banco Del Mutuo Soccoso. It trips off the tongue, whereas its English translation, ‘Mutual Aid Bank’ doesn’t quite sing in the same way. This album – Banco’s first entirely new offering for 25 years – is a very welcome addition to ‘Rock Progressivo Italiano’. Indeed, having first graced the scene in 1969, it’s as if Vittorio Nocenti and company never went away.

For old-time Banco fans and newcomers alike, Transiberiana – which uses a cross-continental train journey as a metaphor for life – contains a variety of treasures. Tracks like La Discesa Dal Treno and L’Assalto Dei Lupi reach back into the spikey and technical chops of their original British contemporaries like Yes and Gentle Giant. The intervening years – not least the stratospheric developments in keyboard technologies – mean that songs such as I Ruderi Del Gulag and dark rocker Lo Sciamano have a bleaker, industrial and more contemporary sound. These are fascinating developments, but there’s also a lot to love in the softer, more Latin and jazzy elements. Campi di Fragole is almost impossibly romantic, a prog ‘bel canto’, that would not be out of place on a warm evening in Saint Mark’s Square, Venice.

Ultimately, it’s hard not to resist the way the Bancos manage to hold their sophisticated understanding of classic prog moves – the intro to Eterna Transiberiana might grace an early-70s Tull album – with a bold Latin willingness to play on the emotions. After its techy opening bars, Eterna Transiberiana becomes a sweet and affecting ballad. The stand-out Il Grande Bianco uses looped guitar and dancing keyboard work to mesmerising effect and creates a satisfying sense of space and wonder. It deserves to become a staple of their live set.

Perhaps the best testimony to Transsiberiana’s quality lies in the fact that the listener has no need to understand Italian to enjoy it. It is an album which transcends language. After losing two founding members in the 90s, it had looked like Banco Del Mutuo Soccoso had called it a day as a creative (if not a live) force. Transiberiana suggests otherwise. While the inclusion of two live tracks recorded in 2018, including the classic Metamorfosi, testify to their ongoing power as a live act, it’s fair to say that this album has reinvigorated the band. On the evidence of this offering, it’s tempting to ask Banco Del Mutuo Soccoso to go on ‘per sempre’.