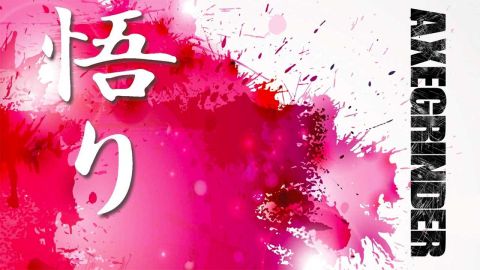 Originally forming in 1986, London’s Axegrinder hail from the same sketchy squat/DIY scene as Amebix, Sacrilege and Deviated Instinct. They often shared the same stages as their peers on the way to infamous obscurity with their 1989 Peaceville-issued debut, The Rise Of The Serpent Men.

Forgetting about the music scene/business disillusionment that drove them apart, the core duo of guitarist Steve Alton and vocalist Trev Speed recently reconvened to start writing music again and here we are 29 years later.

Satori picks up almost exactly where …Serpent Men left off: the age of dreadlocked squat punks discovering mid-paced, slow-burning tempos and the term ‘prog’ not being entirely negatively loaded.

Picture Tragedy’s Darker Days Ahead curveball emerging kicking and screaming from a leftist rally led by Killing Joke chord voicings and Roland TR-808-powered drum circles and you’ll get where this is coming from.