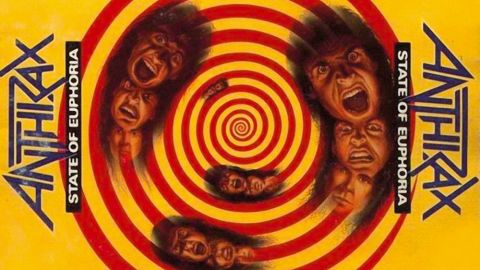 Sandwiched as it was between the sound-defining breakthrough of 1987’s Among The Living and the monstrous grandeur of 1990’s Persistence Of Time, State Of Euphoria has always seemed to be the runt of Anthrax’s 80s litter. Guitarist Scott Ian has been outspoken about his dissatisfaction with the album, both sonically and in terms of the songs, but State Of Euphoria is still regarded with enormous affection by those who witnessed Anthrax’s rise to glory. This deftly remastered, 30th anniversary edition confirms that, in reality, it’s actually pretty fucking great.

Now sounding much heavier and more powerful than it did in 1988, Anthrax’s fourth album plainly lacks Among The Living’s high hit count, but in Be All End All, Now It’s Dark, Finale and that ageless cover of Trust’s Antisocial, the band had four stone-cold classics. The rest is nearly as good; Who Cares Wins is a pale relation to Among…’s A.D.I., but bullish and grandiose nonetheless, while Out Of Sight, Out Of Mind and Misery Loves Company are unsung gems. Only the half-baked Schism fails to make the grade.

Unusually, the bonus material is the real draw here. All the b-sides from the State Of Mind era are present, including the French version of Antisocial and, regrettably, a painfully unfunny stab at Friggin’ In The Riggin’ (a filthy sea shanty popularised by the Sex Pistols) that probably seemed like a good idea at the time (but wasn’t). But it’s drummer Charlie Benante’s demo recordings that make this such an absorbing historical snapshot for the Anthrax diehards. You can hear the album’s songs being pieced together in real time, classic riffs being worked out on acoustic guitars and, thrillingly, the sound of Anthrax discussing and jamming this seminal shit in the studio. Maybe this is one for rabid devotees only, but it’s still an excellent example of how to do these lavish reissues properly.