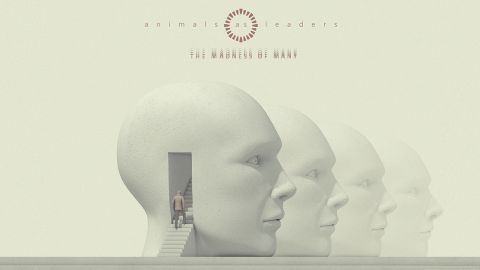 Given their arduous instrumental approach to progressive metal, Animals As Leaders have become an unlikely success. Granted, the virtuosity and sounds conjured by eight-string wizards darlings Tobin Abasi and Javier Reyes atop drummer Matt Garstka’s rhythmic acrobatics are jaw-dropping to behold, but there’s never been much for non-chin-stroking musos to get their teeth into.

While their last effort began to move away from the Meshuggah-worshipping riffs of their eponymous debut and its follow up Weightless, The Madness Of Many continues a further trajectory into the ether, utilising spacey textures and majestic tones over the signature slapping and complex harmonies. Cognitive Contortions lives up to its billing as it shifts and distorts into new forms, Transcentience’s crescendos descend into dreamy passages and gorgeous textures, while the docile The Glass Bridge offers quiet seclusion from the information overload, culminating in the latin and jazz coalition of The Brain Dance and Aperiophobia. Animals As Leaders continue to dazzle, and must be commended for fusing metal into bold new forms but ultimately its musical value will depend on your ability to fathom its dense sonic labyrinth.