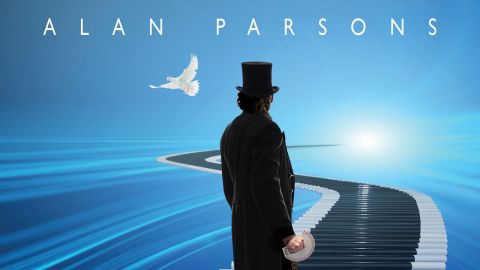 1. The Sorcerer's Apprentice
2. The Miracle
3. As Light Falls
4. One Note Symphony
5. Sometimes
6. Soiree Fantastique
7. Fly To Me
8. Requiem
9. Beyond The Years Of Glory
10. The Limelight Fades Away
11. I Can't Get There From Here

Even with a crystal ball you might not have seen The Secret coming. Alan Parsons’ last studio album, the electronica experiment A Valid Path, was released back in 2004 and, by his own admission, didn’t exactly set the world alight. But by then he didn’t need to be making records at all. His legacy and reputation had already been long assured, through his work with The Beatles and on Pink Floyd’s Dark Side Of The Moon, and his pioneering raft of hit albums with Eric Woolfson as The Alan Parsons Project. His remains a marquee name, synonymous with immaculate production and high-end, hit concept albums.

The Alan Parsons Live Project has been his bread and butter gig for the past two decades, and another album wasn’t on the cards until Frontiers Records founder and Parsons fan Serafino Perugino approached him last year. The songs on The Secret were pulled out of the hat over 2018, but Parsons is a lifelong fan of magic, and the theme for his fifth solo album is one he has harboured for years. The Secret draws on magic and mystery in allegorical, poetical ways, and marks a return to the recording and songwriting approach of the Project’s halcyon days. It’s not just an anachronous rehash of past glories, rather a modern album with echoes of classic times.

Paul Dukas’ The Sorcerer’s Apprentice might trigger nightmares for those of us who were freaked out by armies of walking brooms in Disney’s Fantasia, but here it sets the album’s grand mystical tone. Parsons’ beautifully realised orchestration features Steve Hackett’s classy harmonised guitars and percussion from Zappa drum great Vinnie Colaiuta.

Elsewhere the core musicians are trusted members of Parsons’ touring band, including Tom Brooks (keys), Guy Erez (bass), Jeff Kollman (guitar) and Danny Thompson (drums), and as usual Parsons has recruited a diverse roster of guest vocalists. Pop artist Jason Mraz wrings real sweetness from lead single Miracle, seemingly a song about the magic of human existence and self-knowledge. With its clear, neatly articulated guitar arpeggios, the riff is the most on-the-nose lift from the Project’s Eye In The Sky past, and works well. Foreigner’s Lou Gramm brings fist-punching gravitas to the 80s-style power ballad Sometimes. Long-term Project fans will get a knowing frisson at the line ‘The older grow wiser and fall in love sometimes,’ while the song’s tasteful piano and sober strings are conventional but strong.

Parsons’ own trademark vocals emerge on As Lights Fall, where he assumes the role of an ageing magician bowing out after a happy career doing his tricks. His cut-glass English tones rest nicely on the song’s elegant, mid-tempo chug, as vintage electric pianos burble and celesta-like chimes add colour. He also supplies the counter-melodies to Soirée Fantastique, another Project throwback which transports us to a Montmartre back street for ‘A trick that’s done with mirrors, to exist and not to be alive.’ Powered by vocalist/saxophonist Todd Cooper, this one’s dramatic, with a big, classic-era chorus freighted with gorgeous harmonies and a none-more-80s middle-eight.

Cooper emerges as a bit of a star. The jazzy Requiem sees him wailing on sax and bemoaning ‘the day that the magic died’, with distinctive, Floyd-like ‘oohs’ behind him, a Gilmour-esque solo, and some big bold brass taking the song out. This is probably
as close as things get to Project regular Lenny Zakatek’s forceful delivery. On current Live Project show opener One Note Symphony Cooper holds down the song’s literal one-note vocal as the guitars and strings swirl around him providing the tune. Astronauts talk over radios, Quindar Tones bleep, and a Vocoded voice chants over a celestial choir before the entire song blasts off into space on roaring engines. ‘Any sufficiently advanced technology is indistinguishable from magic,’ Parsons intones, quoting not Asimov this time, but that other science fiction giant, Arthur C Clarke.

There’s a hint of John Lennon to Mark Mikel’s voice on Fly To Me. With its plangent chords, Harrison-style solo and harmonies, this is the album’s Beatles moment, its sweet lyrics evoking crystal balls and the magic of love. PJ Olsson sings Beyond The Years Of Glory, another clever tune with lovely strings, Dark Side-style harmonies and a lyrical guitar solo from Alan Parsons favourite, Ian Bairnson.

If each song is a pleasing sleight of hand, it’s only at the end of closing ballad I Can’t Get There From Here that you feel the true pull of The Secret’s gentle spell. Once you’ve sat through the entire performance you’ll want to go back to the beginning, to try to see how the trick is done. This studio wizard is back in familiar garb, every card in his deck a friendly one this time. The Secret is a smooth, beautifully produced entertainment, and a worthy late addition to Parsons’ act.