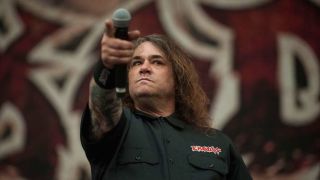 Exodus frontman Steve ‘Zetro’ Souza says he expects Metallica’s next album to be a return to their thrash roots.

The metal giants are working on their 10th record, with drummer Lars Ulrich saying this month he expected the recording sessions to be finished this spring.

And Souza says that, looking back at Metallica’s career path, they are heading towards a more classic thrash sound on the follow-up to 2008’s Death Magnetic.

Souza tells Overdrive: “If you really want to look at Metallica’s progression as a band, look back to the stuff they released in the 90s with Load and St Anger and then they brought out Death Magnetic, so I would say that they are getting more back into form of that classic Metallica thrash sound.

“Also, they are big fans of their own genre and I have a feeling that they are going to release an album that is more in the vein of that classic thrash sound that we have all be doing lately.”

He adds that Metallica will have noticed the distinctly thrash feel of Exodus’ latest effort Blood In Blood Out and Megadeth’s new release Dystopia.

“I really believe that Metallica are aware of what’s going on in their backyard,” he says. “Just listen to the new Megadeth album and tell me that the opening track The Threat Is Real doesn’t take the fucking skin right off your face.

“What a way to open the record dude. It’s just straight in there and I think we did that with Black 13, it just kicks you in the face.”

Exodus have a handful of dates left on their 2016 European tour.