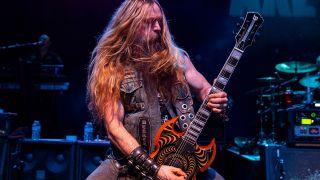 Ozzy recorded the album while recuperating after suffering serious injuries after falling at home in April, with The Prince Of Darkness crediting his Take What You Want collaboration with US rapper Post Malone as the spark which drove the creative process.

But the as-yet-untitled record won’t feature Ozzy’s longtime guitarist Zakk Wylde, who first hooked up with the vocalist in the 80s and made his debut on 1988’s No Rest For The Wicked.

Speaking with the Cassius Morris Show, Wylde said: “We didn't do anything on that. Ozzy, he just jammed with some friends that he knows. He was just, like, 'Hey, Zakk, I ended up tracking some stuff,’ and I was, like, 'Oh, great, Ozzy.’

“That Post Malone thing I heard was awesome. Post came down to a Black Label Society show half a year ago – before the Ozzy thing. He came down and was like, 'Hey, Zakk, what's happening?' A really cool guy.

“When I heard the track, Ozzy sounds great on it, man. But no, I didn't have anything to do with the stuff that Ozzy just recorded."

Asked if people would have expected him to be on the record, Wylde replied: “The whole thing is, we could always get together and record another thing. So it's all good, man.”

Ozzy was forced to postpone his UK and European tour for a second time earlier this month as he continues to recuperate after surgery.

He posted a video message to fans saying: “I’ve postponed my European tour because I’m not ready. I’m not retiring, I’ve still got gigs to do. When I do come back on the American tour, I want to be 100% ready to come out and knock your fucking socks off.”

Ozzy will release the mammoth See You On The Other Side limited edition box set on November 29 through Sony Legacy, which will bring together his solo catalogue along with a host of extras.