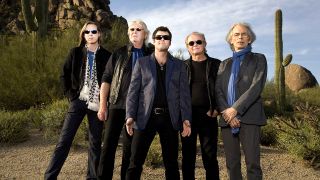 Yes have released a mini box set titled From A Page.

The tracks are To The Moment, Words On A Page, From The Turn Of A Card and The Gift Of Love, with all four newly mixed by Karl Groom and mastered by Mike Pietrini.

In addition, From A Page includes the live album In The Present: Live From Lyon which was recorded in the French city in 2009 and originally released the following year.

This new edition features Second Initial which was previously only available as a bonus track on the Japanese release.

From A Page also comes with booklets and new liner notes by Oliver Wakeman, who oversaw the studio work.

Describing the project, Steve Howe says “Good music never goes away or lays down to the commercial pressures that exist.

“Oliver's compositions To The Moment, Words On A Page and From The Turn Of A Card demonstrate his musicality and talents, while The Gift Of Love explores the collaborative essence of Yes, pooling ideas and then working together on its arrangement, while utilising all of its many themes and variations.

“Karl Groom and Roger Dean both contributed their skills towards making this a worthy further 'page' in Yes' long and diverse musical adventures."

Oliver Wakeman adds: “Following Chris Squire’s passing, I felt that the new music we'd created, but not released, should be heard and not sit unfinished on a shelf.

“And with Steve, Alan and Benoît's enthusiasm for the project, I am proud to know that this music will get to see the light of day and, hopefully, be enjoyed by Yes fans as a piece of previously hidden Yes history.”

Alan White says: “I'm pleased to see a gem of Yes history coming to fruition in the form of this mini box set. New songs from the past and I'm hoping we can find even more music in the archives for future releases.”

From A Page is now available to purchase exclusively through Burning Shed on CD and vinyl.

Yes: From A Page

CD2: In The Present Live From Lyon
1. Siberian Khatru
2. I've Seen All Good People
3. Tempus Fugit
4. Onward
5. Astral Traveller
6. Yours Is No Disgrace
7. And You and I
8. Corkscrew (Acoustic Solo)
9. Second Initial (Acoustic Solo)

CD3: In The Present Live From Lyon
1. Owner Of A Lonely Heart
2. South Side Of The Sky
3. Machine Messiah
4. Heart Of The Sunrise
5. Roundabout
6. Starship Trooper