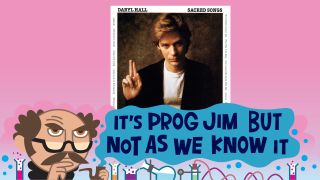 In theory the first solo album by Daryl Hall, scheduled for release in 1977, should have done well. After all, Hall & Oates were going gold in late 70s America. Yet when Hall’s label, RCA, heard the finished results they ordered it be shelved. Frightened that its contents would adversely affect the ascent of the blue-eyed soul singer, RCA’s anxiety principally stemmed from the indelible presence of Sacred Songs’ producer, Robert Fripp, who also contributed some truly maverick playing.

If Hall and Fripp seem unlikely collaborators, Sacred Songs hails from the period of Fripp’s residency in New York, although the pair declared their mutual respect back in 1974.

While the album begins conventionally enough, a whiff of sedition is quickly evident on Something In 4/4 Time, whose clever word-play ironically discusses the constant pressure for commerce to triumph over art. By the third track, Babs And Babs, it’s evident the record is veering off the pop map. The song’s equilibrium is severely shaken when, three and a half minutes in, disconcertingly eerie Frippertronics suddenly manifest like some bewildered ghost, eventually taking full possession of the tune, morphing into a glowering, pensive fade-out. Hall has been quoted as saying that when Fripp plays “it sounds like the universe crying”. The sleek and sultry Philly Sound this ain’t!

The duo engage in some righteous rough and tumble during NYCNY, with the singer executing impressive vocal feats while the guitarist transplants his famously raucous, splintery solo from KC’s Sailor’s Tale into the willing body of some edgy rock riffing. Yet this isn’t a take-over bid, but more of a meeting of committed equals provoking each other.

Originally conceived by Fripp as the first in what he called an ‘MOR trilogy’ (the second being the Fripp-produced Peter Gabriel II plus Fripp’s solo album, Exposure), the guitarist felt that if Sacred Songs had been released when it was made, it would have put Hall in an entirely different category, on a par with the likes of Bowie and Eno. Which is presumably exactly what RCA figured, and why they resisted its release for so long. Only after vigorous, sustained lobbying did Sacred Songs emerge in 1980. Retaining a startling freshness, time has more than vindicated Hall’s risk-taking ambition for his solo debut.