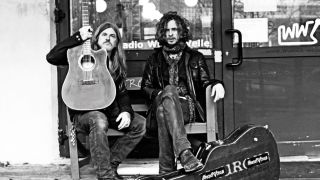 “Shit’s changin’ fast,” says former Obsessed and Saint Vitus guitarist Scott “Wino” Weinrich. “With war on every corner, political theatre becoming increasingly more offensive, and Big Brother and the Globalists intensifying their slow takeover, we offer sounds and vibrations of love, death, happiness and pain! With this music and verse we hope the songs will inspire and uplift, and hopefully unite our searching spirits.”

”Freedom Conspiracy means companionship,” adds Conny Ochs. “It means to have each other’s back. This album is about losing and finding belief. And fighting for it.”

The album is released on March 30, and can be pre-ordered internationally and in The US.