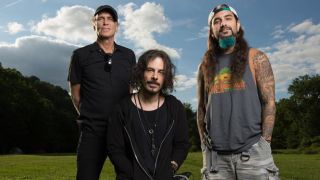 Winery Dogs will enter the studio to start recording the follow-up to their 2013 self-titled debut in May, mainman Richie Kotzen has confirmed.

The vocalist and guitarist, along with drummer Mike Portnoy and bassist Billy Sheehan, have been working together on fresh material – and Kotzen says the ideas they have so far are “crazy” and “cool.”

“We’ll probably start recording it in May and, realistically, it will be out at the end of summer.”

Last month, Portnoy said they were planning a world tour to coincide with the release, while Kotzen admitted the trio had been surprised by the success of the band.