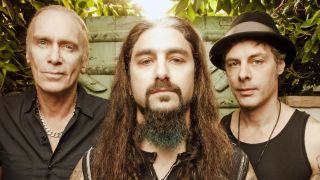 Supergroup the Winery Dogs will start recording their second album in the coming weeks, drummer Mike Portnoy has confirmed.

He’ll begin studio work with guitarist-vocalist Richie Kotzen and bassist Billy Sheehan later this month, and they’re planning a world tour to coincide with the release later in the year.

Kotzen recently admitted the band’s success had taken all three members by surprise. He said: “There was an iTunes rock chart where The Rolling Stones were at number one and we were at number two. All of us were blown away – none of us expected that.

“From there we started to get some amazing touring offers and opportunities. I thought I’d go back to what I was doing, and a few years later, we’d reconvene and do something else. It’s become a real band that is a priority for all three of us.”