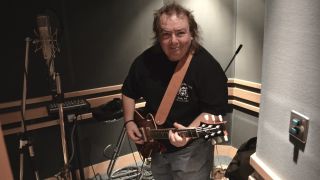 Bernie Marsden released his solo album Shine last month, featuring contributions from the likes of David Coverdale, Joe Bonamassa, Ian Paice and Don Airey of Deep Purple, Jimmy Copley of Jeff Beck's band and Mark Feltham of Nine Below Zero. Now our comrades at The Blues magazine, in association with Mascot Records, are offering you the chance to join those illustrious collaborators and record a track with Bernie.

One lucky winner will have the opportunity to spend a day with Bernie at a studio in Buckinghamshire. The session will include time to jam and practice before getting the chance of a lifetime to record a song with Bernie.

The winner will be able to take the recording home with them as a permanent memento of their day, while Blues Magazine will be on hand to film and photograph your day in the studio. The provisional date for the session is November 21.

To enter the competition, record a video of yourself playing an instrument or singing, and send it to blues16@teamrock.com using WeTransfer.