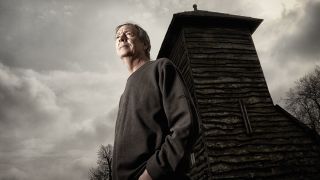 How did this piece become the Moonmadness cover?

Andy Latimer: “Our record company asked several designers to come up with an album sleeve. The instructions were that it would be called Moonmadness and, as it was in those days – and I can remember Pink Floyd talking about The Dark Side Of The Moon and it was the same thing – they just had a title and the designers came in with various ideas. The band looked at them and we all agreed that we liked this one by [John] Field. It was pretty rare that we all agreed on anything, but it was such a great cover. We didn’t work directly with Field as his design was so good – why change it?”

What’s going on in the artwork? What’s your interpretation of it?

“Everybody has their own ideas and conclusions about it. I liked to think of it as two lovers gazing at the moon and madly in love. Moonmadness has a certain feeling of intimacy, which was a lot to do with Rhett Davies’ sound. Somehow Field captured that in the cover, which is probably why all four of us loved it immediately.”

Is it your favourite Camel album cover? And if not, which one is?

“It’s really difficult to say which is my favourite as each holds a different space of time for Camel. For our first album we were just chuffed to get an album out! We loved the softness of the camel blended with the strong rock image of a train – and I like trains anyway! Nude was really good too, and Dust And Dreams. Each album contains a lot of emotions and the cover should capture the same well of feeling.”

The story behind Camel's Moonmadness