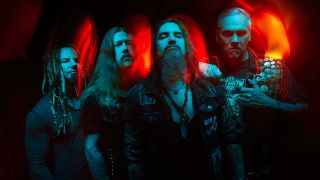 The band announced last month that they’d head out on tour later this year to celebrate the 25th anniversary of their debut album Burn My Eyes with old members Kontos and Mader, and later revealed to Kerrang that the four of them had also re-recorded the full album.

Now the first clip has been released, with Machine Head promising that more will soon follow.

Vocalist and guitarist Flynn told Kerrang: “We plan on dripping that out song-by-song. It’ll probably be digital-only – just something cool to help celebrate. We filmed ourselves doing it so there’ll probably be some playthrough videos, too.”

He added: “It’s so cool seeing us playing those songs again for the first time. There are mistakes, but we just left them in. It was just part of this really special, fun, positive moment.”

Check out the studio performance below.