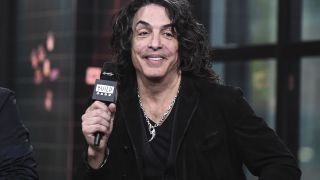 Kiss recently set sail onboard the Norwegian Pearl on the ninth Kiss Kruise, taking fans on a trip to the Bahamas and Jamaica.

While music entertainment was provided throughout the journey, Paul Stanley surprised fans on the final night by reading a bedtime story to children… dressed in a rather fetching Kiss onesie.

The vocalist and guitarist called on the kids in the audience to join him onstage, where they held an impromptu Q&A session and watched cartoons, before Stanley read them Adrianna's First Concert by Petey Mongelli.

Fan-filmed footage has now appeared online and can be watched below.

Kiss have also announced that the 10th Kiss Kruise will set sail from Miami on October 30 through November 4, 2020, with Queensryche the first confirmed artist.

Kiss recently revealed that the final show of their End Of The Road tour would take place in New York on July 17, 2021. Manager Doc McGhee reported that the band have been in talks with former Kiss bandmates about joining them onstage one last time.

The New York venue has still to be announced, with Kiss also revealing a further run of 2020 tour dates.