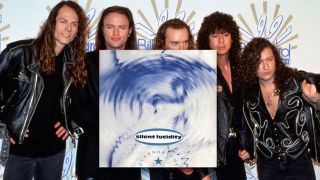 This is a single that charted twice in the UK. In April 1991, it got to number 34, but in August 1992, on being reissued, this climbed to number 18. In the States, Silent Lucidity was the only single from the band to break into the Top 100, peaking at number nine. It was also their sole charting single in New Zealand,. Germany and Switzerland.

Where did the inspiration for Silent Lucidity come from?

“Chris got the idea from a book called Creative Dreaming, which explains how to tap into your subconscious. In a lifetime the average person spends about four-and-a-half years dreaming. You’re doing things like flying, walking through walls - it’s so intense. People can experience incredible physical sensations during dreaming.”

“Our producer Peter Collins initially didn’t want to put it on the Empire album. He didn’t think it was sufficiently developed as an idea, and felt we were wasting our time on it. But that inspired Chris and me to go away and really work it out.”

“More like rock stars, I suppose. But it took a while for this to actually become a hit. However, the label spent a lot of money on making it happen. They truly believed the song was worth all their effort and expense. From that point of view we did feel important, because the record company showed so much commitment.”

“It was a great time for rock music. The blessing was that we were a rock band at a time when it was commercially cool to be one.”