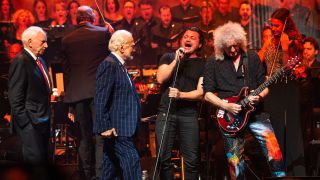 Brian May has performed a very special version of Queen's We Are The Champions at this year's Starmus Festival in Zurich, Switzerland, which May attended to present his Mission Moon 3-D book as well as perform live.

The performance featured as part of Monday night's Once Upon A Time On The Moon concert, in which composer Hans Zimmer was joined onstage by May, Steve Vai, Rick Wakeman and others.

We Are The Champions, sung by Italian tenor Vittorio Grigolo, was performed as astronauts Buzz Aldrin, Charlie Duke and Harrison Schmidt walked onstage. May also sang a version of his Queen classic '39 accompanied by Lucerne's 21st Century Symphony Orchestra. Fan-shot videos of both songs can be viewed below.

"It felt good," said May. "I felt much more comfortable than I thought I would - just concentrating on delivering the meaning of the song. I wrote ’39 in 1975 - it’s a kind of future folk song - a legend about an astronaut who went on a round trip at close to the speed of light, in search of new worlds for the Human Race to colonise; when he returns after what has been a year for him, to the people back on Earth, a hundred years have passed.  It fits in very well with what we are all doing at Starmus, celebrating the connection between science and music."

On Wednesday, May presented his Mission Moon 3-D book to an audience that included Aldrin, Duke and Schmidt as well as Vai, Zimmer, Peter Gabriel, Brian Eno, Buzz Aldrin, Tim Peake, Chris Hadfield, and the director of the new Apollo 11 movie, Todd Miller and other stars of the world of space exploration.

"It makes me smile to think that the two of us (myself and my coauthor, David Eicher) were up there on the Starmus stage sharing our view of the space race in front of three of the very Apollo astronauts who walked on the moon," said Brian May. "These are the heroes who created the incredible story that we're telling 50 years later."

"There sat Buzz Aldrin, Harrison Schmidt and our very special foreword writer, Charlie Duke, who has been so supportive of our process. Plus Apollo Astronauts Al Worden and Walt Cunningham, and Flight director Gerry Griffin.

"Charlie, who was ‘Capcom’ for the Apollo 11 landing, later walked on the moon himself in Apollo 16. He says that the Mission Moon 3-D experience is 'as close to being there on the Moon's surface as it's possible to get for Earth-bound creatures like us.'"

Mission Moon 3-D, by Brian May and David Eicher, is published by The London Stereoscopic Company, and can be ordered online.