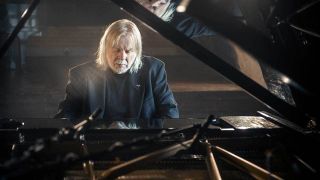 Former Yes man, keyboard pyrotechnician and grumpy old progger Rick Wakeman might be 67, but that doesn’t mean he has any plans to slow down. There’s a world tour with his new supergroup ARW (Anderson Rabin Wakeman), his album Piano Portraits featuring renditions of classics by Bowie, The Beatles and more, followed by a solo tour… “I don’t like being bored,” he says. “I can’t sit around. I’m a fidget. I have to be doing something.” What does his doctor have to say about his manic schedule? “Oh, he gives up with me.”

I avoid funerals like the plague. I’ll go to memorial services, because they’re a celebration. The only funerals I’ve been to in the last few years are Jon Lord’s – I did one of the eulogies, because Jon and I were incredibly close friends – and I went to Keith Emerson’s funeral.

Did anyone see his suicide coming?

I expect one day more will come out, but for now it’s important to think of his family, his kids and grandkids. And the music he left behind.

With such personal losses, has your faith been tested?

I do believe in God and I have a strong faith in that, but I have massive question marks over organised religion. But no, I’ve never tested my faith, cos there are questions we can’t answer.

I got diagnosed with pneumonia on the last week of the tour, which I’m still getting over. That was pretty tough for the last few shows. I’m sixty-seven. I don’t expect to run thirty miles, come home and bounce up and down and go: “Hmm, very fit.” I get what sixty-seven-year-old people get, which is grief.

Talking of lost friends, your mate Fidel Castro died in 2016, too.

I knew Fidel well. I was involved in a children’s cancer hospice down there [in Cuba]. I was in America when he died and I watched all the news reports. And they were, to put it bluntly, all heavily biased. My politics are completely the other side of communist, but I found him very interesting.

You knew Margaret Thatcher pretty well too, didn’t you?

Yeah, I went to Number Ten a few times. I liked her. She didn’t get everything right, and she’d be the first to admit it. I always describe myself as a right-winger with left-wing ideals. Yes, I believe in free enterprise, and yet in the same breath I believe all utilities – water, gas, transport – should be nationalised.

How about Brexit. Were you in or out?

Out. Absolutely. I do think the European Parliament has its place , but I don’t think you can have federal laws to cover Europe.

Are you concerned about the prospect of President Trump?

I’ve a funny feeling he could be good. As long as he surrounds himself with clever people.

Which band would you most like to have joined?

I absolutely adored The Who and Zeppelin. I enjoyed my short time with Strawbs and I loved my times in and out of Yes.

How close did you come in the seventies to Spinal Tap?

Whenever anyone asks me what it was like in the seventies I say: “Spinal Tap.” It was so accurate it could have been a documentary.

Which are the best and worst drugs you’ve ever taken?

That’s easy. I’ve never, ever, taken a drug in my life. I’ve never smoked a joint, I’ve never popped a pill. There was tons of it around, but it never interested me. For the simple reason that everything I do, I do to excess. And I knew if I’d started on the drug thing I would have ended up doing the whole hog and killed myself.

Oh my God, if I knew that I’d be a multi-multi-millionaire. Belief plays an important part, and an honesty about what your capabilities are.

‘It’s Not Fair, I Haven’t Finished Yet’. I’ve got it written in my will that that’s what I want.

Is grumpiness next to godliness?

I think they go together. As you get older you get much grumpier. People stop me all the time and say: “Hello, grumpy!” I’ve got ten grandchildren and they call me Grandpa Grumpy.

What’s been the high point of your career?

There are hundreds. But my real high point is that, aged sixty-seven, I can still do what I love doing and thankfully quite a lot of people like what I do. You can’t beat that.

Piano Portraits is out now via Universal