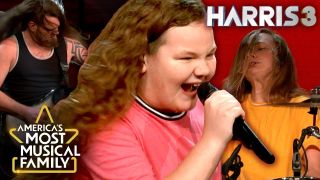 For as long as night has followed day, the internet has had an unshakeable predilection for innovative novelty covers of Smash Mouth's 1999 single All Star. A mild hit upon release, its popularity (and, meme-ability, more importantly) was reignited when it featured in the Shrek film in 2001. The rest, as they say, is history.

You might have thought you'd seen every reimagining of All Star possible – thanks in no small part to the heroic efforts of YouTube maverick Jon Sudano – and you'd be forgiven for thinking so. But you'd be wrong.

American trio The Harris 3 have hit the All Star motherlode by performing a death metal version on a US family TV reality show called America's Most Musical Family. The band – made up of dad Jason on guitar, 14-year-old Ashton on drums and 11-year-old Trent on vocals – tear through a borderline unrecognisable, but undeniably impressive, cover of All Star before facing the judgment of the assembled panel.

"I've never seen death metal, ever," says judge David Dobrik, to the surprise of absolutely nobody. "That was a ride."

The crowd go wild. Judge Ciara? Not so keen, though she does praise the band for having the chutzpah to do something a little different.

Check out the video in full below.