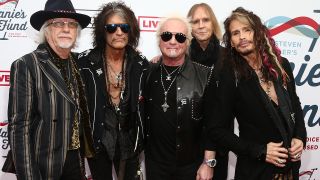 Aerosmith kicked off their Las Vegas residency in style on Saturday night with a 16-song set.

The band released a behind-the-scenes clip on Friday showing them preparing for the 34-date stay at the Park Theater at the new Park MGM resort – and now they’ve released official footage from the event.

They started the set with Train Kept ‘A-Rollin, before launching into tracks including Mama Kin, Sweet Emotion, Cryin’, Livin’ On The Edge, Love In An Elevator, Toys In The Attic, Dude (Looks Like A Lady), Dream On and Walk This Way (full set below).

Fan-filmed footage from Saturday night’s performance has also emerged online and can be found below, along with Aerosmith’s own clip.

The stage show is being produced by Grammy Award winner Giles Martin, who created the soundscape for the Beatles’ LOVE by Cirque du Soleil in Vegas.

The residency contains “some of the most immersive, state-of-the art audio and video technology experiences in Las Vegas” with the shows featuring “never-seen-before visuals and audio from Aerosmith recording sessions.”

Aerosmith: Las Vegas - opening night setlist
Train Kept A-Rollin'
Mama Kin
Back in the Saddle
Kings and Queens
Sweet Emotion
Hangman Jury
Seasons of Wither
Stop Messin' Around (Fleetwood Mac cover)
Cryin'
Livin' on the Edge
I Don't Want to Miss a Thing
Love in an Elevator
Toys in the Attiic
Dude (Looks Like a Lady)

Encore:
Dream On
Walk This Way