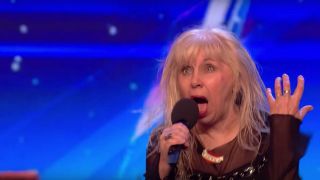 Cotswolds-based pensioner Jenny Darren has wowed Britain's Got Talent judges with a potent version of AC/DC's Highway To Hell. Darren's act featured both an unexpected costume change and plenty of rock vocal power, but it's not the first time the 68-year-old has appeared in front of a live audience. In fact, she's been making music for over 50 years.

After releasing two singles on Fontana in 1966, Darren went on to join The Second City Sound, who featured electronic music pioneer Ken Freedman (inventor of the Freeman String Symphonizer, used by The Who and Elton John, amongst others). She then joined Manchester rock band Stoney End, and eventually found herself supporting AC/DC in 1977.

“It was brilliant,” Darren tells Radio Times. “I was with AC/DC in the afternoon for the sound check and I just looked at my band and I said ‘we have to change the style of the music, guys, to fit in with this band. So at the end of it we were sounding a bit more like AC/DC. I loved them. And that’s why actually fundamentally I became a rock singer – having to fit in to their style. That’s how it happened.”

“Heartbreaker was released on my album," says Darren “But nobody thought to bring it out as a single. I wasn’t that upset about it at the time, but I’ve been more upset about it since when reality dawns on you. When you’re young, you’re doing lots of gigs and things. But of course it’d have made a big difference if I had recorded that as a single, without a doubt."

Perhaps, after this performance, it's not too late. After all, she's younger than Brian Johnson.