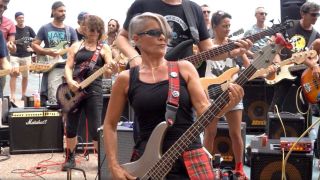 More than 100 musicians on the Indian Ocean island of Reunion have joined forces to celebrate both the magnificence of rock'n'roll music but also its power to cross borders and bring nations together.

Playing under the banner of Rock Reunion, 70 guitarists and bassists, 18 singers and 15 drummers assembled on the sands at the Ti Roule bar in Saint-Leu, a well-known surf spot on the west coast of the island, to perform AC/DC's classic T.N.T.

"The setting is out of the ordinary," say the owners of Ti Roule. "You have the artists playing with their backs to the Indian Ocean, which gives you a breathtaking view of the artists and the sunset in the background."

In a statement on Facebook, Rock Reunion say, "Maybe this is a small Island down in the Indian Ocean, but we rock!"

"On Feb 23 2020 a hundred of us sent this message to the rest of the world. And by the way, we would be happy to be in contact with other countries who do the same. Who knows? Only mountains never meet each other."