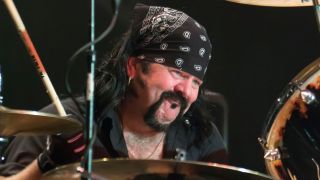 Vinnie Paul says he has no love for the current crop of "show-off" metal drummers.

The former Pantera and current Hellyeah sticksman says overplaying is a curse that affects too many modern drummers.

Paul tells The Jasta Show: “The new guys, to me, a lot of them play too much.

“I always considered myself a groove drummer, and a blast beat don’t have much of a groove to it. And a lot of these drummers play so much that it’s not about the song anymore, it’s like a show-off session. ‘Watch me. Here I go.’ It’s over the top.

“I always felt like drums have to be the support and the driving factor in a song, and there’s places where the drummer has to show off and do things and get the spotlight, but not all the time. You’ve gotta pick and choose. And it’s always gotta be about the song. That’s really the bottom line.”

He goes on to talk about some of his favourite drummers, pouring praise on the likes of Led Zep’s John Bonham and Alex Van Halen.

Paul adds: “I always really loved the guys that made me wanna play drums. John Bonham, probably the greatest drummer ever. All of us wanted to play drums like him.

“Alex Van Halen – I loved his playing because he had so much energy. He made those songs exciting, along with everything else that went with him.

“Tommy Aldridge is the guy that made me wanna play double kick. And then, somebody that really doesn’t reflect in my playing, but I’m a huge fan of, is Neil Peart. He’s an amazing drummer.”