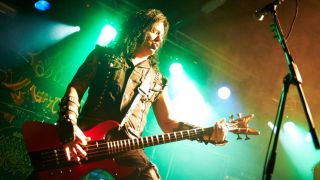 David Vincent has cleared up the confusion over his status in Morbid Angel, admitting he’s no longer a part of the band.

A week of drama first saw the band’s guitarist Trey Azagthoth say he was working with singer Steve Tucker again, before Vincent responded by saying he’d not left the band or been sacked, to his knowledge.

In a new statement, Vincent says: “I had good communication with Trey yesterday and we agree that there are incompatibilities with regards to us working together.

“Trey and I have accomplished amazing things together over the past 30 years and I wish him the best with his future projects. Out of respect for the legacy of these accomplishments, I encourage Morbid Angel fans to not take sides, because I am not.

” look forward to sharing my new endeavours with all of you in the near future. Until then, stay Morbid.”

The band is said to be working on the follow-up to 2011’s Illud Divinum Insanus.