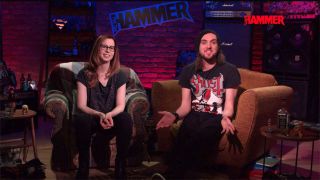 Every week, the team will bring you all the news from the metal world, highlights from the Metal Hammer podcast, album of the week, interviews and much more.

Merlin says: “From the magazine to the website to the podcast and beyond, Metal Hammer has been at the forefront of an ever-changing metal landscape for over three decades now.

“This is an evolution of our brand that we're enormously excited about – not just another extension Hammer itself, but a reflection of the very best – and sometimes worst – that heavy music has to offer in 2018.

“Expect cutting insight, a ton of familiar names from the metal world, and no small dose of absolute bedlam – and all in the week that we've also launched our new-look magazine. It's going to be a blast."

Avidly’s CEO Paul Briley adds: “We are thrilled at the opportunity to bring such an amazing brand to life through video. There was a clear opportunity to serve the dedicated and passionate fans of this music genre with a regular show.

“The Metal Hammer team bring true authenticity to this content, which is the foundation of something special, with great long term potential in appealing to audiences worldwide. This is just the beginning of what will be a great journey from early 2019.”

You can watch the first episode below, which features Ice Nine Kills, Raw In Sect, an unboxing of Machine Head’s Catharsis, an interview with Halestorm and much more.