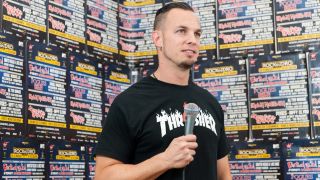 Mark Tremonti says he changed the name of his upcoming solo album to avoid the religious links foisted on Creed and Alter Bridge.

The guitarist’s solo project Tremonti releases second album Cauterize – named after one of the tracks on the record – on June 9. But he originally had his heart set on the title Providence, before it was pointed out that the word’s religious connotations might see his solo band hit with similar criticisms directed at his other bands.

Creed were sometimes branded a Christian rock band while Alter Bridge were also said to have religious links.

Tremonti tells Artisan News: “I wanted to name it Providence. I just thought that was a classy name, I thought it was epic-sounding. Then I get on the phone with my brother, and he’s like, ‘I just looked it up in the dictionary, or Wikipedia, and it says it’s a spiritual boon.’

“I’m like, ‘Yeah, it’s also just something good in general coming your way.’ He’s like, ‘I don’t know, man. People might go the whole religious route on you again.’

“Even when we came out with Alter Bridge, they thought it was like an ‘alter boy’ kind of thing. So I was, like, ‘You know what, screw those people. I’m just gonna call it Providence.”

But when it became clear that his bandmates agreed with his brother Dan’s view, Tremonti opted for Cauterize instead.

He adds: “I was the only guy rooting for it, and I don’t wanna be the dictator in the band. So I went through all the lyrics and wrote down at least a hundred different titles for the record — good lyric lines, or just titles of the songs.

“And I went over it with Dan, who does the artwork. And Cauterize just sticks out.”

Tremonti will be without bassist Wolfgang Van Halen on his upcoming tour dates as he has commitments with his father’s band Van Halen. Tanner Keegan will join the Tremonti touring lineup.