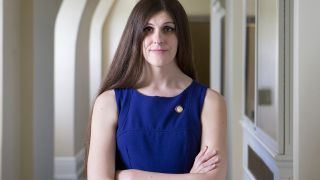 Danica Roem has been re-elected to the Virginia House Of Delegates – making it the first time an openly transgender state official has done so.

Roem, the vocalist for Cab Ride Home, hit the headlines in November 2017 when she became the first openly transgender US state official, ousting Republican incumbent Bob Marshal – a sponsor of the notorious “bathroom bill” which dictates that people must use public bathrooms according to the gender on their birth certificate and not their current identity.

On Tuesday, Roem made history again by being re-elected, securing 57% of the vote ahead of her Republican opponent Kelly McGinn who took 43%.

Roem said: “To the people of the 13th District: Thank you so much for the confidence you've shown in my team and me by such an overwhelming margin. I'm grateful to represent you because of who you are – never despite it.”

In 2017, Lamb Of God’s Randy Blythe congratulated Roem on her result, adding: “Danica is also a writer – award-winning journalist – and a singer in a melodic death metal band.

“When was the last time you heard of a high-level elected official who was a raging Dark Tranquility fan? Or who could discuss Cannibal Corpse in any manner other than a potential court case?”

Cab Ride Home have released four albums since 2009, with their latest Crash The Gate arriving in 2017.