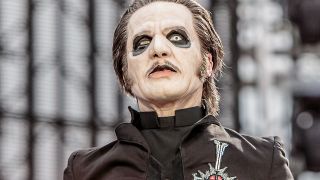 Ghost leader Tobias Forge says he can see himself playing guitar with the band live while he leaves the lead vocals to someone else.

Forge was speaking to Chicago radio station 101 WKQX when he mentioned that when he had the idea of creating Ghost, he envisioned himself as the main songwriter/guitarist who could provide backing vocals.

And when asked if he'd like to play guitar onstage with Ghost, Forge replies: “Obviously, I’m conditioned into being the singer guy, but if I had my way and definitely in an alternative future, if whatever happens, I could definitely picture myself sort of getting someone else to sing and I just play guitar.

“I love playing those songs myself. Obviously, I don't do it very often and if I'm just given a guitar, I have to refresh my memory and the more time I spend jumping around doing other things, the less I play guitar.

Forge reported in February that work had already begun work on the follow-up to 2018’s Prequelle, and last month said he was planning to make the new album “darker” and “heavier”.

Ghost will head out on the road from September across North America on The Ultimate Tour Named Death.