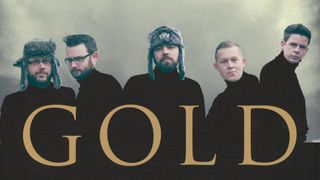 Everyone loves a good bit of 80s pop, right? Well, Bridgend metallers I Fight Bears are no exception. While you might know them best for their ferocious metalcore sounds, their new single offers something of a reinvention for the band.

For their latest single, I Fight Bears have tackled 80s classic Gold and given it a glorious metal make over, replete with crunching riffs and a dual vocal attack. The resulting track is a little nostalgic treat which works surprisingly well.

Vocalist and bassist Drew Hamley tells Louder of the cover: "There's this awesome party that happens at the end of every year with Bridgend Tattoo Studio where musicians from all levels (previously including members of Bullet From My Valentine, Phil Campbell and The Bastard Sons, Those Damn Crows) get up and play an interesting cover song at the party.

"I Fight Bears were asked to perform two songs at the party in 2017. We nailed down one of the songs but were struggling for a second until Chris our guitarist suggested doing a cover of Spandau Ballet's classic song Gold. We all loved the idea. He came back with an amazing metal rendition of the song in our style. We developed it further, reworking the vocals to have singing and screaming and played the song at the party.

"Everybody loved it, so we played it again at some other shows. We went into the recording room to get the song produced properly and then approached Gary Kemp and Spandau Ballet to see if they would give us permission to release it. They loved it and agreed to allow us to release it with their backing, which is incredible."

You can check the single out below.