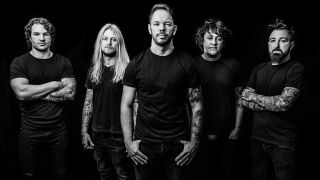 Listen To: Don’t Give A Damn

Music flows freely through the streets of Bridgend, South Wales. In the shadow of local titans Bullet for My Valentine and Funeral For A Friend, genre-bending outfit and childhood friends Those Damn Crows are the latest to take to the stage. Attributing their success to the diversity of their musical influences, Those Damn Crows combine and contrast the contagion of classic heavy metal with the hard-hitting reflections of grunge.

“Our band’s kicking off because there’s a blurred line between rock and metal now, there are elements of everything in our music,” frontman Shane Greenhall suggests. “We take all our influences from when we were kids, whether it be Iron Maiden or Slipknot, Green Day or Nirvana, throw it in the cauldron, give it a mix and out comes what we do.”

The guys are no strangers to the caveats of the music industry – while Shane gets his vocal and lyrical wisdom from his country-loving dad, guitarist Ian Thomas is brother to BFMV sticksman Moose.

“We’ve known the Bullet boys all our lives but we don’t see them as ‘BFMV’,” adds Shane. “We see them as our mates. There was no pressure to go into music or get good grades – Ronnie [Huxford, drums] and I failed music at school!”

Matching their defiance with an equally obnoxious and memorable band name was no challenge for a band determined to ruffle a few feathers on their way up.

“Ronnie’s dad has an allotment and one day crows came down pecking on his plants and he shouted, ‘Those damn crows!’ and Ronnie immediately loved it. Imagine all those old people talking about how loud we are and shaking their fists like, ‘Those damn crows, turn it down!’”

After signing to Earache Records earlier this year, Judas Priest and Heaven & Hell producer Mike Exeter worked his magic on the Crows’ debut album, Murder And The Motive, to nurture their growing ambitions after recording sessions in Wales’s famed Rockfield Studios.

“Recording in Rockfield Studios was so special,” says Shane. “There’s so much history from everyone who’s recorded there: Queen, Black Sabbath, Ozzy… It cost us a fortune but we’d do it again.”

After a busy 2018, the lads have hit the crest of a wave not a moment too soon – the band is seen as the last-chance saloon for drummer Ronnie after years of unsuccessful efforts and turning his hand to owning a tattoo parlour.

“Ronnie was at the point that if it didn’t work this time, it’s never going to work,” admits Shane. “He lost faith. Now people come to his studio for crow tattoos and bring their family and friends along. Now he can do the two things he loves.”

Murder And The Motive is out now.