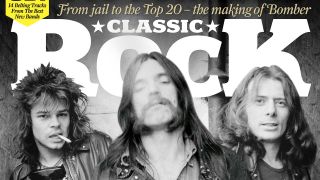 We also take a look at some other classic albums that announced themselves to the world 40 years ago, from artists who would go on to even greater success in the following decade. Bands like Foreigner, ZZ Top, Scorpions and Whitesnake.

Speaking of the 80s, this issue we also celebrate that decade in the life of Queen – the years in which they had it all, lost it all and reclaimed it.

We've also made a limited edition alternative cover featuring Queen - this is available in UK stores and internationally.

Motörhead
Having just been let out of a Finnish jail, Lemmy and co.returned to England needing to record a follow-up to their hit album Overkill – and fast. The result was Bomber, which came out all guns blazing, the charts in its sights.

1979
1979 was not only a big year for Motörhead, it also saw the release of key albums by bands that would undergo a transformation in the 80s. Including…

Whitesnake
How Lovehunter changed the game.

ZZ Top
“Sometimes, change is hard to take.” The making of Degüello.

Saxon
Their astonishing debut and the year when the dam burst.

Don Felder
From growing up in poverty, to being in one of the biggest bands in rock history as they flew high then crashed and burned, the former Eagle has had a self-confessed “interesting journey”.

Diamond Head
Inspired by heavyweight rockers such as Black Sabbath and Led Zeppelin, they seemed to be poised for major NWOBHM stardom. Yet they remained cult favourites.

Wildhearts
Since the early 90s they’ve continued to light up the rock world – and been through hell in the process. Now they’re back with their first album in 10 years. And it’s really good.

Queen In The 80s
It was the decade when Queen had it all, lost it and then clawed it back again. But behind the strut and sparkle of the band in the 80s, storm clouds were gathering.

What's on your FREE CD?

The Stories Behind The Songs: Johnny Kidd & The Pirates
Knocked up in a hurry and originally intended as a B-side, Shakin’ All Over became one of the great British rock’n’roll records of the early 60s.

Q&A: Bobby Gillespie
The Primal Scream man on the importance of punk, doing things their own way and speaking rock’s classical language.

Six Things You Need To Know About… Hollis Brown
So who are these New Yorkers making a blood-spattered journey from the garage to the stars?

Record Store Challenge: Royal Republic
What did the Swedes end up buying when Classic Rock gave them 50 quid and took them record shopping?

Buyer’s Guide: Y&T
While they’ve had their ups and downs, in the 80s they recorded some albums that have stood the test of time.

The Soundtrack Of My Life: Bonnie Tyler
Power ballad belter Bonnie Tyler on the special records, artists and gigs that are of lasting significance to her...

Classic Rock 263 is available in UK newsagents now, and is also available to purchase online.