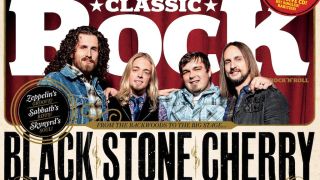 The new issue of Classic Rock hits the shops today. With Black Stone Cherry making their debut appearance on the cover, it comes with a FREE CD of hits, exclusive acoustic songs and brilliant live tracks (from Download 2013) from the band.

It’s a very special cover, and not just because it features Black Stone Cherry’s logo rendered on glossy paper via the ancient technique of letterpress (ask any old newspaper hack). It’s also a special cover because it conceals a vast amount of very exciting content, including twenty bulging pages of reviews.

We’ve even made a video trailer featuring Black Stone Cherry, in which we reveal the process by which the cover logo was produced, while the band talk about their approach to being a classic rock act: “We just try to write songs that will fit with modern day, but remind people that music has been around for decades”.[](https://www.youtube.com/watch?v=s6Q3z0ANWo4)

The Who: Long before they were The Who, Pete Townshend and Roger Daltrey were in The Detours. Their journey took in conceptual art, a lot of dope and a whole lot of blues.

Funk rock: From Prince to the Red Hot Chili Peppers, Mother’s Finest to Dan Reed, we bring you a celebration of the dirtiest and downright funkiest bands ever. Including…

Red Hot Chili Peppers: In 1989, reeling from the death of their guitarist, it was make or break for the Chilis. Luckily the album they were about to make would save their career and put funk rock back on the map.

Ginger Baker: Famed as much for his fiery temper as for his genius behind the drum kit, the former Cream drummer shares 10 tips from an eventful life lived by no one’s rules but his own.

The Rutles: A razor-sharp pastiche of The Beatles with links to Monty Python and the Fab Four themselves, The Rutles were the original Spinal Tap.

The new issue is on sale now at all hard-rockin’ newsagents, or can be ordered online from MyFavouriteMagazines.