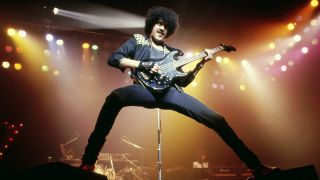 A documentary about the life of Thin Lizzy’s Phil Lynott is currently being planned.

Screen Daily report that the film is titled Phil Lynott: Songs For While I’m Away and is to be directed by Irish filmmaker Emer Reynolds. He’ll be joined by producers Alan Maher and John Wallace of Cowtown Pictures, while Peter Worsley of Eagle Rock Films is also involved.

Reynolds says: “Having been a huge Thin Lizzy fan throughout my life, it’s an incredible honour to be bringing this celebratory and intimate portrait of lead singer and songwriter Philip Lynott to the big screen.”

Further details on Phil Lynott: Songs For While I’m Away while be released in due course.