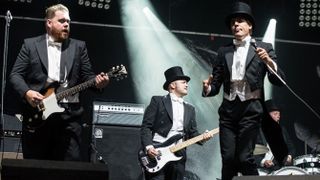 The Hives say that work is continuing on what will be their sixth studio album.

The Swedish outfit’s last release was 2012’s Lex Hives and as they prepare to perform at this weekend’s British Summer Time festival at London’s Hyde Park, vocalist Pelle Almqvist says they have new songs ready – and they’re sounding “awesome.”

He exclusively tells TeamRock: “We’ve got a lot of great songs but we’re having a hard time agreeing what the modus operandi is like – is there a producer, is there no producer?

“There’s awesome songs and I’d love for you to hear it, I think it’s some of the best stuff we’ve ever made, but we have to find out how to finish it and agree on it.”

The Hives will join other bands including Green Day, Rancid, The Stranglers, The Damned and Stiff Little Fingers in London this weekend – and Almqvist says he’s looking forward to playing in front of a large audience.

He continues: “Sometimes I’m not very popular with a group of 10 people but put in front of 50-100,000 and everybody loves me, so that’s going to be great for me. I’m really excited about it.

“We know all those bands from playing shows and festivals together. When Rancid put out their first record that was my favourite and I was a huge Operation Ivy fan when I was a child – they were my favourite band and Rancid were the new band from Operation Ivy – I loved that stuff.

“Coincidentally, in our little shitty hometown of 12,000 people, both Rancid and Green Day played there when we were kids so we saw both of them in our hometown when were like 14 which was awesome. It’s going to be a fond rekindling seeing them again.”

He adds: “I don’t think they’re going to let us play for that long because it would be too hard for the other bands to follow, so we’re only going to play the singles. It’s going to be great”

Following their appearance in London, The Hives have several live shows planned in Norway, Sweden, the Netherlands and Spain. Find a list of their upcoming shows below.

Every The Hives album in their own words