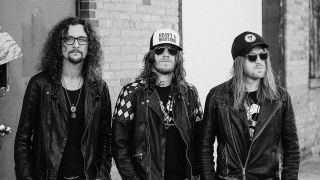 The Cadillac Three have released a new version of The Jam, originally found on last year's Country Fuzz album. Roughened up around the edges, the revitalised song has been retitled The Jam (+ Fuzz).

"I wrote it with BK [Brian Kelley] from [Nashville duo] Florida Georgia Line, Corey Crowder and James McNair," singer Jaren Johnston told Music Row earlier this year. "We were all super hungover because we were at the 30A Songwriter Festival. Corey had that little track and I was under the impression we were writing it for Florida Georgia Line.

"Florida Georgia Line cut it and it didn’t make the record, so I took it in the back lounge of the bus and just like took it more of a Jerry Reed meets some sort of P-Funk slash Cadillac somewhere where it would make sense around what we were doing on this new record."

The releases follows April's launch of the band's version of the Post Malone's hit song Circles. The band filmed a video for the recording, with each member filming themselves in isolation before lead singer and guitarist Jaren Johnston edited it all together.

The Cadillac Three have released a number of videos from Country Fuzz over the last year, including clips for Crackin' Cold Ones With The Boys, All The Makin's Of A Saturday Night and Slow Rollin'.