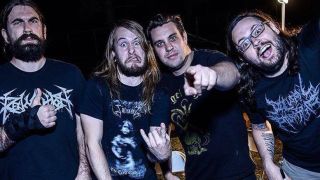 The Black Dahlia Murder guitarist Ryan Knight has revealed the band are working on a new album and hope to launch it later this year.

Their last release was 2013’s Everblack and Knight says while they’re confirmed to play festivals in Slovenia and Switzerland later this year, they also hope to embark on a wider tour across the rest of Europe and the US.

He tells Gear Gods: “We should have a new album out this year. It’s currently being written and then we’ll be touring – a lot. You’ll probably see us around this summer maybe in the States and probably in Europe.”

The guitarist also says he’s planning to record a solo album to allow him to showcase another side to his playing.

He continues: “I would love to do a solo album. Once we get this Black Dahlia album out of the way I’m probably going to try and start working towards doing one.

“Doing a solo album is an outlet to do something that’s totally different from the band. I don’t know when it would be released but hopefully in the next year or two.”