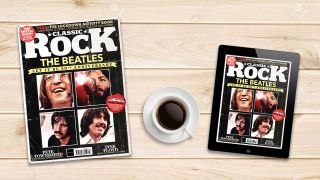 Unbelievably, it’s half a century ago this month since The Beatles released their final album, Let It Be. In the new issue of Classic Rock We take a look back to tell the story of its fractious making, in the words of those who were there.

We also look back at the feuding behind Pink Floyd’s The Final Cut, and at Pete Townshend’s brilliant solo album Empty Glass.

Given that we’re all housebound at the moment, we also thought we’d give you a break from the family jigsaw, and tax your brains with our epic puzzle/activity book.

Also, to soundtrack your CR reading we’ve brought you a brilliant 12-track digital album from our friends at Bloodshot Records.

Let's be honest: We’re not essential, we’re not saving lives, we’re just here to provide entertainment. Hopefully that’s what we’ve managed to do this month, and with any luck we might at least be able to take your mind off troublesome things for a little while.

In the meantime, please keep yourselves safe, and we’ll see you next month.

The Beatles
With the band falling apart, they set to work on a new album. Having endured sessions that were more battleground than crucible of creativity, they ended up with a record that “nobody was happy with”. Fifty years after its release, this is the fractious story of Let It Be.

Wishbone Ash
After 50 years, 26 studio albums and a bitter legal battle, for Andy Powell keeping Wishbone Ash going “has been a personal quest. For me it’s almost become a religion”.

Pete Townshend
A late-70s blitz of punk, personal problems and tragedy forced The Who’s Pete Townshend to reassess his life and career. One result was his solo masterpiece Empty Glass.

Steve Earle
All songs are political, machines are taking over, yoga is great for the voice, all acid-heads believe in God… Find all this and more in The Gospel According To Steve Earle.

Deap Lips
Puckering up and climbing into bed with each other, Deap Vally and the Flaming Lips come together as Deap Lips, with an album that’s a fascinating cross-pollination of styles.

Pink Floyd
1983’s The Final Cut might not be the first Pink Floyd album that springs to mind, but there’s no doubt that it’s one of the band’s most significant.

Brain Yoga!
Whether you do them while being a couch potato, pumping pedals on a exercise bike or to pass the time while standing in the queue at the supermarket, we’ve got all your puzzle needs covered with The Classic Rock Lockdown Activity Book!

What's on your free digital album

Rock The Country!
We’ve joined forces with our friends at Bloodshot Records to bring you this exclusive collective of alternative, roots-infused rock’n’roll; country, punk, poetry and more, including Rookie, Vandoliers, Ruby Boots & Indianola, The Yawpers, Mekons and more.

The Dirt
Queen, Metallica, Iron Maiden, The Struts and many more feature in our rundown of highlights from rock’n’roll’s online/from-home lockdown endeavours; No live concerts til Autumn 2021, according to some experts, and how a new charity is helping endangered British venues… Welcome back Stephen Dale Petit, Vandenberg and The Sword… Say hello to Vambo and Robert Jon & The Wreck… Say goodbye to John Prine, Dave Greenfield, Ronan O’Rahilly...

The Stories Behind The Songs: Thin Lizzy
Had things been different, the band might never have even bothered to record what became their signature song – The Boys Are Back In Town.

Six Things You Need To Know About… Gorilla Riot
With three guitars there’s room for intricacy, but there’s plenty of noisiness as well as plenty of depth.

Buyer’s Guide: Suzi Quatro
A girl in a then largely man’s world, with her looks, charisma and star quality she was the queen of 70s glam-rock.

Listings
Who’s playing where and when (although expect further cancellations), including a separate list of re-scheduled gigs.

The SoundtrackOf My Life: Kip Moore
The singer-songwriter on the special records, artists and gigs that are of lasting significance to him.

How to buy Classic Rock Magazine

* Copies of the new issue of Classic Rock can be purchased online from MyFavouriteMagazines. MFM will be holding more stock than usual.

* Classic Rock is on sale in the UK in shops that remain open such as supermarkets and newsagents, although delays are possible as stores prioritise the delivery of different lines of stock.

* An easy option is to go digital. You can subscribe digitally from just £2.19 an issue. Individual issues and subscriptions are also from the Apple Store, Zinio, Readly, Press Reader and Pocketmags.

* Save money by buying a physical subscription. UK subscriptions are available - you can also subscribe below.

* Please note that we are not currently accepting new orders on print subscriptions outside of the UK due to COVID-19 logistical issues. We hope to be able to offer this again soon. Please check back for details. Single issue magazine orders are not affected by this.

* The postal service is working, although delays are possible.