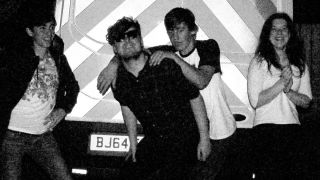 A young metal band from Cornwall in England have asked for Dave Grohl to intervene after they were told to stop practicing in a garage following complaints to the council.

In response to the complaints, Cornwall Council ordered teenage four-piece Black Leaves Of Envy to keep the noise levels down to between 30 and 40 decibels – barely louder than a bird.

The band is made up of 17-year-olds Cerys Plenty and Adam Jones and 15-year-olds Dylan Plenty and Lewis Cunningham, who are all students at Helston Community College.

Andrew Plenty – Cerys and Dylan’s father – says the group have been targeted because they are playing heavy metal.

He tells West Briton: “I would suggest, if they were playing jazz in the garage, it would not be a problem.

“We only have one immediate neighbour and they have not complained. The other houses are a farmer’s field away. They used to practise no more than one or two hours a week and it was always in the afternoons, not at antisocial hours.

“For the last three months, they’ve not been able to practise at all.”

Now Andrew Plenty – himself a musician with local rockers Bobby’s Helmet – is enlisting the help of friends to set up a suitable venue for bands to practice without fear of complaints.

He adds: “We’re looking into youth funding and there are a number of musicians who have come forward to help with our campaign.

“I am trying to form a committee at the moment. It’s just now getting everyone round the table and looking for some suitable premises.”

And he has even reached out to one of the biggest names in rock for assistance. He says: “There’s a quote from Dave Grohl saying kids should get into their garages and start practising if they would like to be the new Nirvana. We’ve, hopefully, sent off a letter to Mr Grohl asking for his endorsement with our campaign.”

Cornwall Council says its Community Protection Team is trying to resolve the issue.