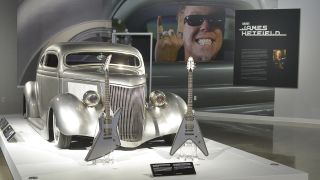 Metallica fans and car enthusiasts now have the chance to see James Hetfield’s collection of customised classic vehicles that were on display at the Petersen Automative Museum in Los Angeles.

The exhibition was titled Reclaimed Rust, with Hefield showing off a selection of his cars, including his 1948 Jaguar ‘Black Pearl’ and his 1937 Lincoln Zephyr ‘Voodoo Priest’ in the Bruce Meyer Family Gallery along with a selection of Metallica items and memorabilia.

In the new video, the museum’s Shell Reinish takes viewers around the collection, introducing the vehicles and the stories behind them.

Earlier this month, it was revealed that a book based on the exhibition would be released on July 28.

It’s titled Reclaimed Rust: The Four-Wheeled Creations Of James Hetfield and features photographs taken by acclaimed automotive photographer Scott Williamson at Photodesign Studios, who was specially commissioned to bring the cars to life.

Speaking previously, Hetfield explained: “Reclaimed Rust to me means that old guitar, sitting there with songs still in it, waiting for someone to pick it up and breathe life into it again – and I’ve done that with many of these cars.

“I’ve seen cars sitting in a field in Kansas and thinking, ‘They’ve got a story to tell – let’s bring this thing back to life.”